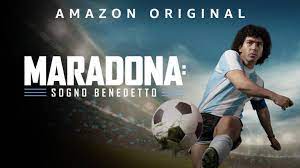 November 9 – Lazio have hit out at the makers of Amazon Prime’s dramatised ‘Maradona: Blessed Dream’ series for a scene in which the Rome-based club are branded fascists.

The scripted series, which follows the life of the late Diego Maradona, who was hero-worshipped during his time at Napoli, features a scene where the character who plays the Argentine legend comments: “these fascists want to humiliate us,” referring to Lazio, a club with a history of far-right extremism among part of its fan base.

Lazio were fined by UEFA and had sections of their stadium closed for one game in October 2019 after a group of fans were caught making fascist salutes during a Europa League game against Rennes.

But the club are furious to be associated with fascism in the Amazon programme and have asked Amazon Prime for the scene that is “as improbable as it is painful” to be cut as it “lacks respect for Lazio fans and the memory of a great champion.”

“The reference to fascism is all the more hateful because it is evoked with clear defamatory intent,” read a statement on the club website.

“It manages to achieve the extraordinary result of insulting an entire fanbase and club, moving away from reality and also the thoughts of Maradona himself, who showed on many occasions that he was a friend of Lazio.”