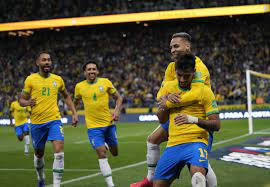 November 12 – Brazil have become the first South American country to qualify for the 2022 World Cup after a 1-0 victory against Colombia to maintain their proud record of having participated in every single World Cup.

On Thursday, a single second-half goal from Lyon’s Lucas Paqueta was enough for Brazil to maintain top spot in the qualifying table and take an unassailable lead with 34 points, nine clear of second-placed Argentina, who meet Uruguay on Friday.

The Brazilians have been unbeaten in qualifying and were tested by a physical Colombian team on a wet pitch in Sao Paulo. In the second half, coach Tite introduced Vinicius Jr, Anthony and Matheus Cunha in attack, but it was midfielder Paqueta who delivered the winning goal, Tite’s 50th victory in charge of Brazil.

At the 2018 World Cup in Russia, Brazil were eliminated in heartbreaking fashion by Belgium in a high-octane quarterfinal in Kazan.  “The only thing that motivates me is doing a whole cycle, something that was not done at the last opportunity,” said Tite. “Just like I did at Grêmio, Corinthians, Caxias… Then I thought, I thought, man, maybe my professional trajectory will allow me to do an entire cycle.”

Tite and his backroom staff will travel to Qatar during the FIFA Arab Cup to inspect hotels and other facilities. Doha’s Westin Hotel will probably serve as Brazil’s basecamp during the World Cup.

The Brazil coach also indicated that his team won’t go on a courtesy visit to Brasilia before or after the World Cup (in case of victory).  As world champions, Brazil have always been feted by the acting president: in 1958 by Juscelino Kubitschek, in 1962 by João Goulart, in 1970 by General Emílio Médici, in 1994 by Itamar Franco and in 2002 by Fernando Henrique Cardoso.  Next year, Jair Bolsonaro will still be in charge, irrespective of the election results.

On the pitch, Brazil will wrap up 2021 with a qualifier against rivals Argentina.