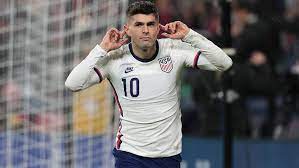 The US go top on goal difference and a point ahead of third placed Canada, who beat Costa Rica 1-0 via a goal by Lille striker Jonathan David.

Costa Rica, Jamaica and El Salvador in the eight-team group. Only the first three teams qualify automatically with the fourth team going into the intercontinental play-off.

After a frenetic first half in Cincinnati it took a header from Pulisic (pictured), on as a substitute, to break the deadlock on 74 minutes. Pulisic has a habit of scoring big goals against Mexico, scoring from the penalty spot in extra time to win the Nations League final for the US  in the summer. McKennie put the World Cup qualifier beyond doubt on 84 minutes.

Both the US and Mexico have tricky away games in their second matches in this international window with Jamaica entertaining the US and Mexico facing Canada in Edmonton, one of the cities bidding to be a host venue for the 2026 World Cup.

Canada are now the only unbeaten team in qualifying and drew with Mexico 1-1 in the cauldron of the Azteca Stadium in Mexico City and game-by-game have established themselves as a leading Concacaf team over the past two years.

While Canada are rising, fuelled by some outstanding young talent, Costa Rica are struggling to maintain their previous regional dominance and face a big game against another former powerhouse Honduras, who are bottom of the qualifying group after three draws.

Panama have the opportunity to see off one of their qualification rivals hosting El Salvador at the Rommel Fernandez stadium. El Salvador have struggled to find the back of the net so far in qualifying, having only scored three times but still managing to get six points.

In contrast Panama have scored nine times, three of them in their match, a crucial 3-2 away win against Honduras.