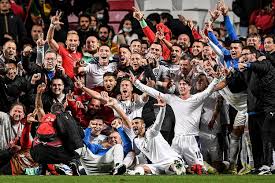 November 15 – On a night of high drama, Serbia and Croatia booked automatic places in next year’s World Cup finals on Sunday, condemning Portugal and Russia to the playoffs.

Aleksandar Mitrovic’s 90th-minute header for Serbia in Lisbon stunned Cristiano Ronaldo’s Portugal, the visitors’ comeback 2-1 win giving them a spot in Qatar, with the Portuguese now having to negotiate the March playoffs.

Portugal only needed a home draw to finish top of their group on goal difference but Mitrovic’s winner sparked wild celebrations on Serbia’s bench while jubilant fans thronged central Belgrade.

“We have to take responsibility because we had a poor game,” said Ronaldo. “We just defended in the second half. Credit to Serbia, they played very well but we had the capacity to be on top.

“Everyone in the dressing room is disappointed but we have to look ahead to the playoffs now because we are more than good enough to be in the World Cup.

Mitrovic said Serbia’s confidence ahead of the game was vindicated. “We are reaping the rewards of hard work and the belief that we would be able to defy the odds,” he said. “We are overjoyed, for our country and the people first and foremost.”

Russia now also take their place in the playoffs which start on March 24 and will sort 12 teams – 10 group runner-ups and the two strongest Nations League teams – into three brackets of four, with only each winner going through.  The draw takes place on November 26 in Zurich.

Spain only needed a draw in its final qualifier against Sweden to qualify,  but left it late when Álvaro Morata netted in the 86th minute.

The biggest surprise perhaps is that unheralded North Macedonia remain in contention to reach the World Cup for the first time after beating Iceland 3-1 to secure a playoff spot.