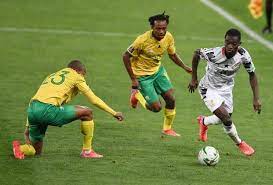 November 15 – South African officials suspect match-fixing was at play in Sunday’s crunch 1-0 World Cup qualifying defeat to Ghana and want FIFA and the Confederation of African Football to investigate the conduct of the officials.

Senegalese referee Maguette Ndiaye and his colleagues delivered what South African reports claim was one of the worst displays ever seen in an international match to ensure Ghana won in Cape Town through a dubious penalty.

The officials reportedly made several other questionable calls and incensed SAFA CEO Tebogo Motlanthe who told TimesLIVE they would not take the outcome of the match lying down.

“We suspect the game was fixed and our position is that it must be investigated,” he said. “The conduct of the match officials left much to be desired and we want both CAF and FIFA to investigate.”

SAFA informed the match commissioner on the day, Kachalla Babagana Kalli from Nigeria, of their intention to report the officials to FIFA and CAF after a result that saw Bafana Bafana crash out of World Cup contention.

It is reported SAFA will call for the match to be replayed at a neutral venue. Both sides finished on 13 points in the group, but Ghana proceeded to the next round of qualifying due to more goals scored.

“We went to the match commissioner after the game and told him our intention to lodge a complaint with both FIFA and CAF on how the officiating of the game was,” said Motlanthe.

“It was a daylight robbery. The penalty incident was not in isolation. We’ll be writing an official letter to FIFA and CAF.”

In 2017, FIFA ordered the World Cup qualifier between South Africa and Senegal to be replayed after the Senegalese Football Federation lodged a protest over referee Joseph Lamptey’s handling of the game, which included the incorrect awarding of a penalty to the South Africans who won 2-1.

Lamptey, from Ghana, was subsequently handed a life ban for match manipulation.

“We’ll use the Senegal game where FIFA requested us to replay because of the referee’s action, and not ours,” said Motlanthe. “[The Ghana game] is of similar nature and we believe in many ways that it was fixed. We are collecting information that will be used to support our case.”