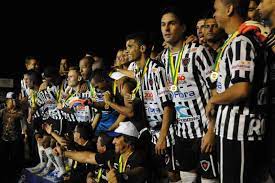 November 16 – With two games remaining in the season, Rio giants Botafogo have clinched the Serie B title and promotion to the top flight following a 2-1 rearguard win against Operario.

Fabiano Souza handed the visitors the lead but late goals from both Pedro Castro and Rafael Navarro in front of 30,000 fans at Rio’s Olympic Stadium ensured three points for Botafogo and the league title, with 66 points from 36 matches, four points clear of second-placed Coritiba and eight points clear of fifth-placed Avai.

Coritiba, Goias, Guarani, Avai and CRB all remain in the hunt for the three remaining tickets to the Serie A.

“These fans deserve this,” said Botafogo manager Enderson Moreira. “It was a very difficult year. Today the fans won this game for us.”

Last season, Botafogo were relegated from the top flight despite the high-profile signings of both Keisuke Honda and Salomon Kalou. The veteran stars failed to ignite the team and instead, the season became a lengthy procession of draws and ultimately a slide to the foot of the table. It was the third time the Rio club were relegated since 2002.

In the ’60s, Botagofo was, alongside Pele’s Santos, one of the best club sides in the world, boosted by two generations of formidable players. First, Garrincha, Didi and Mario Zagallo played their way to greatness with Botafogo before the generation of Jairzinho and Gerson stepped in to flourish and add more silverware, but in recent times the club has not been able to replicate those heights.

Botafogo last won the domestic league title in 1995 and the club has never been far away from bankruptcy, burdened by almost €160 million of debt. In recent weeks, the club drew up a plan to pay off €28.7 million in unpaid wages over the next ten years.