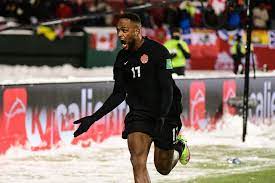 November 18 – Canada took control of the Concacaf World Cup final qualifying in Edmonton with a win over Mexico putting them the top of the group. It was a night of drama that also saw the USA drop points and to third in the table as Panama forced themselves back into contention.

Canada’s 2-1 win over Mexico was achieved with two goals from Cyle Larin in Edmonton’s Commonwealth stadium where temperatures had dropped to minus-9 Celsius and snow had been cleared from the pitch.

Larin (pictured) put Canada in front in stoppage time of the first half when he pounced on a rebound fri Mexican keeper Guillermo Ochoa into action. His second came from a set piece delivery by Stephen Eustaquio.
Mexico turned up the heat but could only halve the deficit in the 90th minute with a goal by Hector Herrera. It was Canada’s first win against Mexico in World Cup qualification in more than 45 years.

Canada remain unbeaten in the eight team final qualifying group and go two points ahead of Mexico who drop to third, two points behind Canada and a point behind the US. They are on the same points as Panama but ahead on goal difference.

The US have a tricky track record in World Cup qualifying in the Caribbean having lost in Trindad before the Russia 2018 World Cup in a match that ended their qualification hopes. The scars of that failure to qualify run deep within US Soccer.

Jamaica have been slow starters in qualifying but have picked up some heritage players from the Premier League who are starting to make a real difference.

The US took an early lead with a goal by winger Ricardo Pepi before West Ham striker Michail Antonio fired a shot from outside the 18-yard area to equalise.

The draw took Jamaica’s unbeaten run to four games and keeps them in with an outside chance of qualification but they will need to turn draws into a put a run of wins. They are currently seven points behind Mexico and Panama with six games to play.

Panama put pressure on the top three with a 2-1 win away to El Salvador. A goal down at half time, Panama rallied in the second half with goals from Cecilio Waterman and substitute Freddy Gondola.