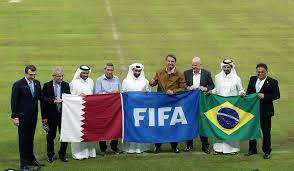 November 18 – FIFA president Gianni Infantino has praised the preparations for the 2022 World Cup on a visit to Doha’s Lusail Stadium where he met with Brazilian president Jair Bolsonaro.

On the outskirts of the Qatari capital, the mammoth venue is close to being inaugurated and will host the final of next year’s global showcase. The Zurich boss visited the stadium alongside Bolsonaro, who is on a state visit to Qatar.  They were accompanied by the Secretary-General of the Supreme Committee for Delivery and Legacy (SC) Hassan Al Thawadi and CEO of the 2022 World Cup Nasser Al Khater.

Infantino said: “For all those who love football, this will be like a toy shop is for a child. There will be eight, state-of-the-art stadiums – some of the most beautiful stadiums in the world within 50 kilometres [of each other], so it’s going to be great.”

Qatar, however, has come under renewed criticism for the way the country has delivered the infrastructure for the global finals. Recently, Amnesty International released a 48-page report claiming migrant workers are still being exploited at World Cup infrastructure building sites and that Qatar still has to come good on its promise to deliver more progress for workers’ rights.

Next week, preparations for the global finals will be stepped up with the Arab Cup kick-off, which will bring together 16 teams from the region and allow another two World Cup venues to be inaugurated. The tournament will serve as a major test event for local organizers before the World Cup. In the past, World Cup hosts warmed up by staging the Confederations Cup, but the unloved tournament was ditched by FIFA after the 2017 edition in Russia.

Lusail will not be among the six venues to stage matches during the Arab Cup. Tickets for the tournament are now on sale over the counter in Qatar.