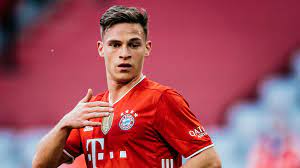 November 22 – The Europe-wide protests against new Covid restrictions have spilled over into football with Bayern Munich reportedly having informed their unvaccinated players that they will have their salaries cut during periods when they have to go into quarantine.

The news came as the number of Covid cases in Bavaria have spiked and a local government ruling that Bayern Munich must restrict stadium capacity to a maximum of 25% (18,750) with the risk that matches may end up behind closed doors.

The new health restrictions stipulate that is if the seven-day infection rate does not drop below 1,000/million, then matches will be played behind closed doors. The games likely to be affected would be against Arminia Bielefeld (November 27) and Mainz (December 11) in the Bundesliga, and in the Champions League fixture against Barcelona (December 8).

Bayern midfielder Joshua Kimmich (pictured), who has so far declined to be vaccinated against Covid due to “personal concerns”, was sent into a second round of isolation on Friday because of a new coronavirus exposure.  He had only just been released the previous Tuesday.

Bayern say Serge Gnabry, Jamal Musiala, Eric Maxim Choupo-Moting and Michael Cuisance also had to be isolated over contact with an individual who tested positive.

The news is an unwelcome distraction coming just before Tuesday’s Champions League tie at Dynamo Kiev though Bayern are already through to the last 16.

For Kimmich, whose annual pay is reportedly around €20 million, a week’s quarantine means a wage cut of about €384,000.

Former Bayern boss Karl-Heinz Rummenigge told Sky that if the wage cuts are confirmed, they “should be understood as a sign that the club is now reacting. Because it must react.”

Germany is battling a renewed surge of the virus with infection numbers. Those not immunised will have to provide negative tests even to use public transport or go to the office. They will also be banned from restaurants, sporting events and cultural shows in regions where the hospitalisation rate is high.

Bayern sports director Hasan Salihamidzic said the club accepts some players do not want to get vaccinated.

“My position, and that of the club, is that we all want to get vaccinated because that is the only way out of the pandemic, but you have to accept that not everyone sees it that way. It’s a difficult situation,” Salihamidzic said.