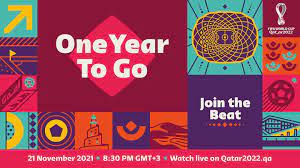 November 22 – With global scrutiny of Qatar’s human rights record showing little respite, the public face of the 2022 World Cup, Hassan Al-Thawadi, says he hopes the tournament will help “wash away” stereotypical attitudes towards the country.

Exactly one year ahead of the first ever winter World Cup, Al-Thawadi, Secretary General of the Supreme Committee for Delivery & Legacy, was in typically bullish mood when he addressed an international ‘Countdown To History’ media webinar today.

Al-Thawadi was joined at today’s seminar by FIFA president Gianni Infantino and Machaille Hassan Al Naimi from the Qatar Foundation with the emphasis very much on legacy, inclusivity and sustainability.

There were few eye-catching moments in the hour-long session, which came across as a somewhat worthy public relations exercise with safe, pre-prepared questions from the moderator.

Time only allowed for a handful of questions to be taken from the invited media, meaning no sensitive issues were addressed. But Al-Thawadi acknowledged in his opening remarks that there was still considerable international scepticism over Qatar being allowed to stage the tournament.

It will of course be like no other World Cup, the first to take place in the Middle East offering fans chance to attend more than one match per day during the group stage with so many venues packed together.

But ever since the country won the vote in 2010, Al-Thawadi has been at pains to accentuate the positive. However much it might frustrate him, the issue of migrant workers, human rights and the sporting merits of Qatar being World Cup hosts persist with only 12 months to go.

His chief hope, he said, is that bonds of friendship will be forged by those who attend the tournament and that perceptions of his country will change as a result.

“What I’m hopeful for is that people look back at (the World Cup) as always remaining positive in their memories…and that bonds will last beyond 2022.”

Infantino said there was little doubt the World Cup would have a positive impact in the Middle East. “It will change the region in terms of perception but also in terms of football impact.”

“I’ve never seen a country that is so ready to host the World Cup. I can name other host countries in other parts of the world where even for many years after the event the stadiums were still not ready.”

Al-Thawadi attempted to draw a parallel with the last World Cup in Russia in terms of that much-used word, perception.

“In Russia in 2018, a lot of stereotypes were washed away when people interacted with the Russian people,” he said. “The experience they had was different to what they had heard.

“This is the biggest legacy this part of the world will be able to offer, showcasing the Arab world, not just Qatar. It’s a great opportunity to showcase the culture, the heritage and hospitality of this part of the world. Anyone who comes here for the first time will be in for a wonderful surprise.”