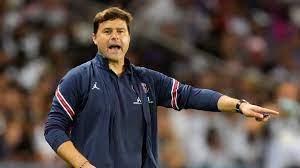 November 23 – As speculation mounts over a likely move to Manchester United to replace the sacked Ole Gunnar Solskjaer, Mauricio Pochettino has broken his silence by reaffirming his commitment to Paris Saint-Germain. But for how long?

United are reported to be poised either to scrap their intention to appoint an interim manager by going for Pochettino immediately – or to land the former Tottenham boss at the end of the season.

Speaking ahead of PSG’s Champions League clash with Manchester City, the Argentine insisted he was fully focussed on his role as head coach of PSG.

“I am not a kid, not a child. I’ve spent my whole life playing football. We’re in a business where the rumours are there,” he said.

“The rumours are there, but that kind of thing cannot distract me. I am so happy at Paris St-Germain.”

PSG, who have never won the Champions League, are currently top of Ligue 1, 11 points clear of second-placed Nice after 14 games.

“I love the club, I love the fans – it is a fantastic time to be at the club,” said Pochettino, who spent two years at PSG as a player.  “My contract is to 2023 – this season and one more. I am really happy at PSG – that is a fact.”