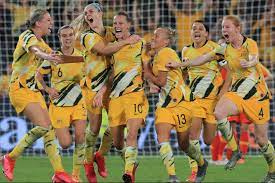 November 25 – Football Australia’s AGM this week marked a significant watershed moment for the association that has been through a difficult governance review, had to navigate through internal divisions and achieve a secure financial footing that was not helped by the global pandemic.

Significant in the turnaround is the increased role of the women’s game both in the running and the business of the FA.

The Football Australia Board now comprises nine members of which five are female and four are male – a first for the major sporting bodies in Australia with a gender split of 55% female and  45% male, and probably anywhere within FIFA’s federations.

At the same time the playing strength of the Australian women’s game has brought new money to football and increased commercial attention. Previously the Aussie FA was significantly reliant financially on men’s qualification for the World Cup.

For 2022 that qualification looks far from certain with the men’s team currently in a play-off position for a shot at the inter-continental play-off. Non-qualification would mean the Aussies miss out on an automatic $12 million payment and the potential to earn more if they progress through the group stage. In the past it would have been a potential financial Armageddon for the federation.

However, the rapid commercial progress of the women’s team, who this weekend start a two-match series against the US in sold out stadia, will provide a financial insurance should the Aussie men not qualify. The progression to greater financial stability was emphasized by Football Australia’s president Chris Nikou who highlighted the new naming rights sponsorship for the Commonwealth Bank Matildas.

Six months after the World Cup is played, Australia and New Zealand will co-host the 2023 Women’s World Cup, which will create an even larger platform for the Australian women’s team.

Football Australia chief executive James Johnson said: “Despite the challenges of the year, 2021 has been a year of action and implementation for Football Australia. We have taken huge strides this year aswe brought to life many elements of our bold vision for the sport.

“We saw Australian football lead in the reopening of Australia’s international borders as we welcomedthe Socceroos and Commonwealth Bank Matildas back to our shores in the October and Novemberinternational match windows,” he continued.

“We launched the 2027/22 Domestic Match Calendar which ensures the alignment of our footballcompetitions both domestically and to the International Match Calendar.”

This has resulted in a new landmark A$100 million media rights agreement with 70 ViacomCBS.

Now they need are focused on 2022 qualification. Whatever happens they will get by with a little help from their women.