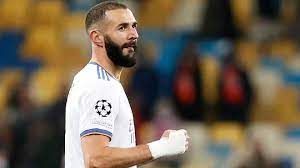 November 25 – France and Real Madrid star striker Karim Benzema (pictured) has been found guilty of conspiring to blackmail a fellow French footballer with a sex tape. He has been sentenced to a one-year suspended jail term and fined.

The striker had been accused of helping four other men blackmail Mathieu Valbuena, a teammate in the France squad, over an intimate video that had been taken from Valbuena’s mobile phone and last month Benzema went on trial over the attempted extortion.

Benzema has always denied any wrongdoing and after his sentencing, which included a fine of €75,000, his lawyers said they would appeal. The judge said Benzema had “implicated himself personally, through subterfuge and lies, to convince his teammate to submit to the blackmail”.

“The reaction is ultimately an angry one to this judgment which is perfectly contradictory,” said his lawyer Sylvain Cormier outside court.

The case dates back to June 2015, when the two footballers were at a French training camp. Benzema pressured Valbuena to pay off the blackmailers, whom he had conspired with to act as an intermediary, prosecutors said.

The scandal has long stunned French football with both Benzema and Valbuena banned from the French national team. Didier Deschamps kept Benzema away from Les Bleus for five years before recalling him, making a U-turn for Euro 2020.

“Everyone has the right to make mistakes,” said Deschamps when he recalled Benzema, but Les Bleus crashed out in the round of 16 against Switzerland.

Four other co-defendants were also found guilty. They were handed jail sentences ranging from 18 months suspended to two-and-a-half years in prison.