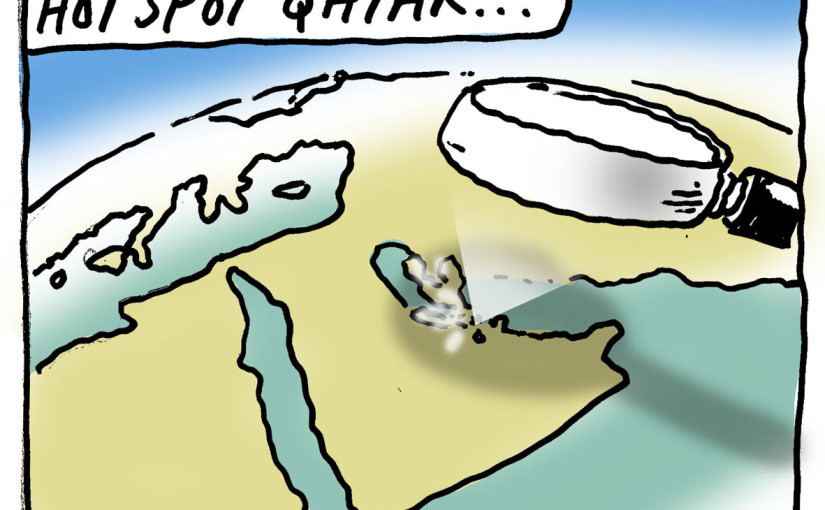 November 25 – Qatar detained Norwegian journalists Halvor Ekeland and Lokman Ghorbani from state television NRK for “trespassing” after they filmed a migrant labour camp.  After 30 hours, the pair were released, but the incident has sparked a diplomatic row between Norway and the World Cup hosts.

With a year to go until the 2022 World Cup and on the eve of the Arab Cup, a dress rehearsal for the global finals, Qatari authorities arrested Ekeland and Ghorbani, accusing the Norwegians of “trespassing on private property and filming without a permit”.

Qatar’s ambassador to Norway was summoned to Oslo’s foreign ministry over the matter and the Norwegian Prime Minister Jonas Gahr Stoere called the arrests “unacceptable”. He wrote on Twitter: “A free press is crucial in a functioning democracy.  This also shows the importance of this year’s awarding of the Nobel Peace Prize (to journalists).”

“We were arrested at the hotel on Sunday night,” Ekeland told Norwegian media on arrival on Wednesday in Oslo. “We were taken to the police station, and we stayed there for several hours.”

“They had gotten all the permissions needed to conduct interviews,” said NRK boss Thor Gjermund Eriksen at a news conference.

The journalists said they had verbal permission to film.

“As in almost every country, trespassing is against Qatari law, which the crew members were fully aware of before entering the property,” said the Qatari government, adding that “the footage they captured while trespassing was deleted by the authorities in accordance with Qatari law.”

A FIFA spokesperson said: “FIFA defends the principles of media freedom. We have been in regular contact with local organisers (Supreme Committee for Delivery & Legacy) and NRK to establish the circumstances of the detention of an NRK crew in Doha in recent days. We note the statement by the Government Communications Office in Qatar that states crew “knowingly and wilfully” violated the law by trespassing on private property before they were released without charge. FIFA will remain in further contact with NRK and the SC, who collaborated with, and assisted, the crew during their time in Doha.”

In 2010, the Gulf country won the hosting rights for the 2022 World Cup after a controversial vote by the FIFA executive committee that dashed the dreams of among others the United States and Australia, but ever since Qatar has faced severe scrutiny over its treatment of migrant workers, who labour to deliver all the infrastructure required to stage the tournament.

Earlier this year, the Guardian reported that 6,500 migrant workers have lost their lives in World Cup-related construction since the 2010 vote. The figure has been disputed by Qatar, but the report led to a storm of protest, ignited by Norwegian club Tromso.

The arrests come at a sensitive time. Hosting the Arab Cup, the spotlight is firmly fixed on Qatar. The tournament replaces the Confederations Cup as a warm-up exercise for the World Cup hosts and kicks off on November 30 when Qatar take on Bahrain at the Al Bayt stadium.