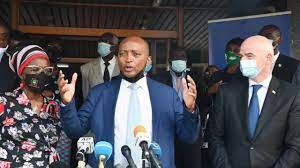 November 26 – The Confederation of African Football (CAF) and its president Patrice Motsepe, at the confederation’s congress today, have further endorsed the creation of a continental Super League, but provided little detail on the competition. Motsepe also reaffirmed CAF’s commitment to Cameroon hosting the 2021 Africa Cup of Nations in January.

But for all the bravado, Motsepe, who this summer said broadcasters across the continent have expressed a firm interest in a potential Super League, failed to deliver any further details about his pet project.

When quizzed about the future of the Champions League or the Confederation Cup once a Super League materialises, Motsepe replied that “today was an endorsement of the understanding that this is an important competition that will benefit African football and improve the quality, but also generate income not just for the clubs and countries that are participating but for those that are not at participating.”

African football believes that it can succeed with the concept where Europe has failed. In 2019, FIFA president Gianni Infantino – in attendance in Cairo – first mooted the idea, saying he favoured 20 permanent African Super League members plus others who would qualify via regional play-offs.

The African Super League would serve as a feeder competition to FIFA’s enlarged Club World Cup. That reformatted tournament has been delayed because of the global health pandemic.

“It is exciting and it has huge potential,” concluded Motsepe. “The executive committee must continue with the good work it is doing.”

But what that good work Motsepe referred to entails, remains shrouded in mystery. Motsepe has previously said that the Super League would be underpinned by the principles of grassroots development, inclusion and general development, but questions over broadcast partnerships, commercial exploitation, the match calendar and other logistics all remained unanswered.

At least, the CAF supremo delivered clarity on the rising concern, speculation and innuendo over Cameroon’s hosting capabilities of the delayed 2021 Africa Cup of Nations, which will kick off in January.

The 24-team tournament will be played at six stadia: two in the capital Yaounde, the new Japoma Stadium at Douala, with venues also in the towns of Bafoussam, Limbe and Garoua. But pre-tournament, noise has grown that the West Africans would not be able to stage the finals. Motsepe has now sought to drown out the noise with a firm endorsement of the hosts. He explained that Cameroon is “95% ready” but has “issues to fix in the north”.

Motsepe said: “The passion I saw in Cameroon around the AFCON, I have never seen it before. I am confident that we are going to have a wonderful AFCON in Cameroon in January.”