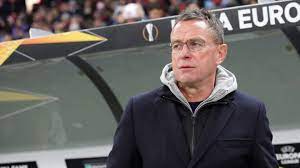 Rangnick, 63, will need to leave his position as head of sports and development at Lokomotiv Moscow to take up the role until the end of the season and will not be available until early next week according to media reports because of work permit timing.

Talks are reported to be ongoing over a deal that would also see Rangnick (pictured) remain at the club for a further two years in a consultancy role.

The highly experienced and knowledgeable Rangnick is one of the most respected names in German football.

United are planning to make a permanent appointment at the end of the season with Paris Saint-Germain boss Mauricio Pochettino apparently still their first choice, with Ajax head coach Erik ten Hag also in the frame.

Solskjaer was dismissed as United manager on Sunday morning when United, eighth in the Premier League, made it clear that they would look to hire an interim replacement initially.