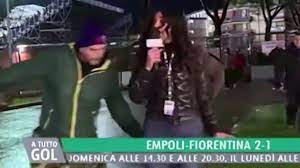 December 1 – Italian police have banned a fan from all sporting events for three years after he allegedly slapped the bottom of a female reporter live on TV, a gesture that drew widespread condemnation.

The man came up behind Greta Beccaglia, 27, while she was addressing a camera outside the Italian team Empoli’s stadium in Florence after a game against Fiorentina.

Saturday’s incident came as Italy’s top league and its players were taking part in a campaign denouncing violence against women. All players wore a red mark on their faces as a sign of solidarity against harassment.

The alleged assailant has been named as Fiorentina fan Andrea Serrani.

“First he spat on his hand then gave me a violent slap on the behind which hurt,” Beccaglia said. “Everyone saw it but no one said anything.”

What shocked many viewers of Toscana TV was the reaction of Giorgio Micheletti, her male counterpart in the studio, who said: “Don’t let it get to you.”

Micheletti was criticised for the comment and Toscana TV said he was taking a “professional break” from the programme.