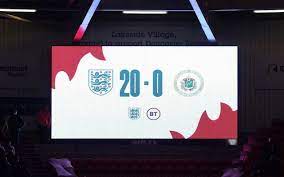 December 1 – England bettered Belgium’s 19-0 victory against Armenia with 20 goals of their own against Latvia to set a new European record in Women’s World Cup qualifying.

Ellen White became England Women’s all-time leading scorer, overtaking Kelly Smith, and England achieved their biggest-ever victory including four hat-tricks. The English had previously been criticised for not being clinical enough, but they showed Latvia no mercy to consolidate their top spot in Group D on the road to the 2023 Women’s World Cup in Australia and New Zealand.

In their away match, England had defeated Latvia 10-0, but they doubled that goal tally at home. The 20 goals were scored by 10 players. England’s previous highest win was a 13-0 victory against Hungary in 2005. As a result, the English enjoy a mammoth +53 goal difference in the group.

England coach Sarina Wiegman said: “We kept on going … the opponent wasn’t very good but you have to make the game yourself, keep your shape … the energy stayed in the team for the whole game and I think that’s really impressive.”

England now hold the European record for the biggest win in Women’s World Cup qualifying. Last week, Belgium seized the record with a 19-0 win against Latvia with Tessa Wullaert scoring five goals. Janice Cayman said “I’ve never experienced this. In the men’s game, you also have teams like San Marino against which you score easily. But you don’t just score 19 goals.”

During this window of international World Cup qualifying, there were other whitewashes with Northern Ireland thrashing North Macedonia 11-0, Spain hammering the Faroe Islands 12-0, Germany humiliating Turkey 8-0 and Ireland getting a 11-0 victory against Georgia.

Last month, governing body UEFA said it plans to address the imbalance in the qualifiers. The European confederation adopted the men’s system of qualifying, but that has at times led to mammoth scorelines and one-sided matches. To avoid meaningless matches, a plague in the men’s game, UEFA is considering changes to the lop-sided qualifiers.

“The qualification systems for the World Cup and Euro, which UEFA organizes and not FIFA, they’re already going to be examined very closely and we will see an improvement in the future,” said UEFA’s head of women’s football Nadine Kessler.