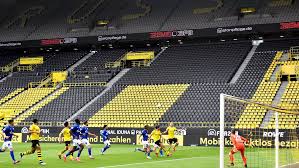 December 3 – Bundesliga matches will once again be played out in front of capacity-reduced crowds following the reintroduction of Covid-19 restrictions in Germany.

Clubs will be allowed an attendance of up to 50% and a maximum of 15,000 fans. So far, they had been operating to full capacity this season, but as coronavirus numbers spike in Germany, local authorities have imposed restrictions, agreed on by current German chancellor Angela Merkel, her impending replacement, Olaf Scholz and 16 separate states. On Thursday, Germany reported 73,000 positive cases.

Chief executive of the German Football League (DFL) Christian Seifert didn’t protest the new restrictions but rather expressed understanding, commenting: “A temporary limit on the number of fans in the stadium is understandable. The DFL hopes that this decision by the federal government and the states leads to an improvement of the pandemic situation.”

He did call on authorities to develop a better strategy to tackle the Covid-19 crisis in Germany. “It is unfortunate that, due to the conditions of the pandemic and the still low vaccination rate in Germany, restrictions in many areas of life are at all necessary,” said Seifert. “This situation needs a sophisticated, comprehensible and, above all, effective strategy from policymakers.”

Borussia Dortmund cancelled the 67,000 tickets it had sold for the match against Bayern Munich, a traditional blockbuster in the Germany calendar. The match will now be attended by 15,000 at the Westfalen Stadium.

The Bundesliga was the first major European league to restart after the pandemic first hit. Matches were played behind closed doors to complete the 2019-2020 season. Last season, the vast majority of matches in the Bundesliga were played in front of empty stands.