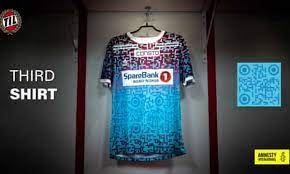 December 7 – Norwegian top-flight club Tromsø have produced an innovative team shirt featuring a QR code that puts the spotlight on human rights issues in Qatar with just under a year until the World Cup.

The club say the design, on their third kit, has been created in collaboration with Amnesty International and will take those who scan the code to a page about sports washing and conditions for migrant workers in the Gulf country.

On its website Tromso said the uniform, which includes the colours of the Qatari flag,

is the “first kit in history with a QR code”.  The team will wear it at home on Sunday for their last game of the season against Viking FC.

“Tromsø were the first professional club to speak out against the inhumane conditions in the country,” said the club’s website.

“We hoped FIFA and Qatar would listen but obviously money still trumps human rights and human lives. How many human rights violations will it take before the football community unites to demand better protection for migrant workers?”

“We feel it is our duty to speak out,” Tromsø’s managing director Øyvind Alapnes told CNN.

“If we don’t speak out with a loud voice for those who aren’t heard, then who will do it?”

“Many people in football are seduced by money and just close their eyes to where the money comes from. Therefore, many don’t risk standing up for something. We must dare to ask ourselves: Is it OK that someone dies in order for ‘my team’ to be successful?”

Peder Egenæs, secretary general of Amnesty Norway added: “Brand new stadiums with huge floodlights and beautiful goals must not dazzle us so that we don’t see what happens in the shadows.”