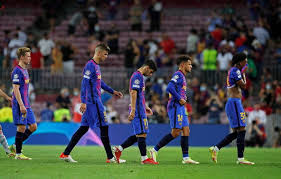 December 9 – For the first time in 18 years Barcelona have been eliminated from the Champions League before the knockout stage after being humbled 3-0 by Bayern Munich on Wednesday.

In crisis on and off the field, the result dumped the five-time European champions into third spot in Group E and a place in the tier-2 Europa League.

“We start a new era, from zero, from here,” new Barcelona coach Xavi Hernández told broadcaster DAZN as he tried to put on a brave face.

Bayern’s win allowed Benfica to make the last-16 at Barcelona’s expense as they beat Dynamo Kyiv 2-0.

Barca’s demise co-incided with the club’s first post-Lionel Messi season, with no quick fix likely due to severe financial issues. “We need to work hard, many things that put Barcelona in this situation. But this is our reality. I cannot say anything else,” Xavi added.

Other teams to make Monday’s knockout draw included Lille and Salzburg. Defending champion Chelsea and Juventus had already sealed their places but the Italians nicked top spot in Group H after Chelsea were stunned by a Zenit St. Petersburg equaliser deep into stoppage time for a 3-3 draw in Russia.