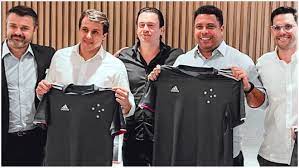 December 20 – Brazilian legend and Real Sociedad owner Ronaldo has obtained a controlling stake in his old club Cruzeiro, which has been struggling in the second division of the Brazilian game.

“What I do know is that the kid who learnt at Cruzeiro that dreams can come true today makes me believe that it is possible to rescue the club from its crisis.”

Brazilian investment bank XP brokered the deal and said, in a statement, that “it seeks to help the Brazilian football industry with professionalisation, capitalization and opening new opportunities.”

Recently, Cruzeiro shifted from a non-profit membership model to a limited company. Brazilian Congress has recently passed a law allowing football clubs to become businesses, effectively opening them up to private ownership and the ability to engage with investors.

“This is the first bit of business in a relevant new front for the investment banking market in Brazil, the country of football,” said Jose Berenguer, CEO of Banco XP.

“I have no doubt this is transformational in the history of Brazilian sport. We will have clubs that are stronger, with the capacity for global investment. Brazilian football will never be the same again.”

It is the second time Ronaldo has entered the ownership arena. In 2018, he bought a 51% stake in the Spanish club Real Valladolid.

Once the club of Tostao and a powerhouse in the Brazilian game, Cruzeiro were relegated to the second tier of Brazilian football for the first time in 2019. This season they finished 14th, just five points above the relegation zone. The club carries more than €150 million of debt, much of it to players who went on strike in October over delayed salaries.