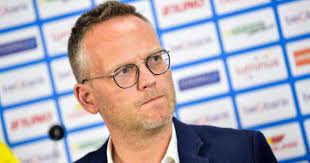 December 21 – Peter Croonen (pictured) has stepped down as chairman of the Belgian Pro League after a dispute over the domestic calendar with Racing Genk, the club he also chairs.

Genk had requested the Pro League reschedule fixtures as the club could miss up to nine international players in January because of player commitments with Asian, African and South American national teams.

However the league body rejected the request, before the Belgian Court of Arbitration for Sport sided with Genk.

“As chairman of Genk and the Pro League, this is a balancing act too far for me,” explained Croonen his resignation. “Such a mandatory combination is legally embedded for all directors and therefore systemic within the Pro League. The strategic reform in 2022 should solve this. I advocate for an independent chairman, in addition to independent directors.  And the need for change does not stop there.”

In 2019, Croonen succeeded Marc Coucke, the owner of Anderlecht, as chairman of the Pro League. Croonen has been the president of Genk since 2017.

His resignation comes at a turbulent time for the Belgian game.  At the weekend, Club Brugge vs Anderlecht was overshadowed by racist chants while new revelations in the ‘Propere Handen’ case – the federal public prosecutor’s investigation into money laundering, bribery and match-fixing – have surfaced. Top-flight matches have been rocked by crowd disturbances and, on a performance level, AA Gent remains the only Belgian club left in European competition.

But, seemingly, none of those problems had prompted Croonen to take a step back, who said that steps had been taken to fix them.

He acknowledged that Belgian football is suffering and that the way forward will not be straightforward.  “The storm is not over. The corona crisis, Clean Hands, our waning international competitive position…. The work is not finished, as was painfully illustrated yesterday in the fight against racism.”

Croonen leaves his role six months before his mandate was due to expire.