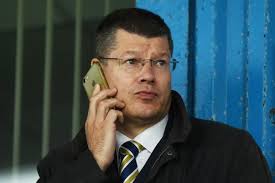 December 22 – A decision on whether or not the Scottish Premiership winter break will be brought forward is expected in the next 48 hours after a 500-capacity cap was placed on all spectators over what is traditionally a heavily attended Christmas and New Year programme.

The cap will last for three weeks from Boxing Day unlike fixtures in England which are controversially going ahead with no restrictions despite the Omicron variant continuing to spread globally.

In Wales, the devolved authorities are being even stricter with all games to be played behind closed doors from Boxing Day.

Top-flight Scottish clubs met on Tuesday night, with the majority in favour of shifting the mid-season break from January 4-20 to a Boxing Day start in order to save crucial revenue. Aberdeen have estimated they stand to lose £500,000 from home games against Dundee and Rangers.

However, the final decision will rest with the SPFL board.

SPFL chief executive Neil Doncaster (pictured) described the restrictions as “a hammer blow to clubs and fans across the country, who simply could not have done more to mitigate the impact of the ongoing pandemic.”

In a statement Celtic, one of Scotland’s two biggest clubs, said: “Everyone recognises the difficulties presented to society by the current pandemic and the health and safety of all must always be our priority.”

“The game owes it to supporters to explore all opportunities to maximise the prospect of all supporters being able to attend matches and support the game they love.”

Hibernian also backed the move, saying it would “protect the integrity of the competition” and avert loss of revenue, while Motherwell chief executive Alan Burrows said the restrictions were “incredibly frustrating”.

“We should start the winter break now,  and rearrange these matches when all fans have a chance to attend at a later date when hopefully restrictions are eased,” Burrows added.

But St Johnstone manager Callum Davidson cautioned: “Obviously we want the games to go ahead as much as possible but you don’t really know the severity of Covid in three weeks’ time. That’s the only issue. We could end up being six weeks.”