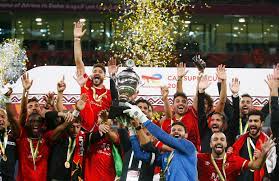 At Doha’s Ahmad Bin Ali Stadium, one of eight 2022 World Cup venues, Casablanca took the lead after 13 minutes when Abdelilah Madkour’s attempt took a deflection to find the back of the net. However the Egyptians equalised in the last minute when Percy Tau set up Taher Mohamed.

In the penalty shoot-out, Al Ahly prevailed 6-5 to clinch a record eighth Super Cup, which pits the winner of the Champions League against the victor in the Confederation Cup. In the 2020 edition, Al Ahly had defeated AS Berkane.

Some of Pitso Mosimane’s players returned late from the Arab Cup, but the South African coach never voiced concern about the disruption. It is the third time he has won the competition. Al Ahly will go on to represent Africa at the Club World Cup in the United Arab Emirates in February.

“It’s always tough. We thought it was going to be like this,” said Mosimane. “I think if Raja had played more, they would’ve had the chance to win, but they played to delay the game and sit on the floor.”

“But we are a good team. We are Al Ahly. We have great spirit.”

It was the fourth year in a row that the Qatari capital has staged the African Super Cup. Last Saturday, the Arab Cup, a World Cup dress rehearsal, concluded in Qatar, with the hosts claiming bronze in the third-place match at Doha’s 974 Stadium and Algeria winning the final at Al Khor’s Al Bayt Stadium.