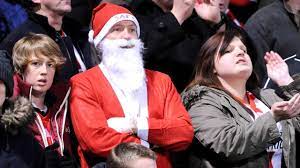 December 23 – English football’s Covid-hit top flight has been shorn of two Boxing Day matches amid fears others will follow over the busy Christmas and New year programme.

The Premier League has postponed Liverpool’s game against Leeds United and the match between Wolves and Watford.

The Premier League said Leeds could not play “due to the number of players with Covid-19, injuries and illness.” The club’s training ground has also been closed.

“The league is aware that the decision to postpone these two matches will disappoint supporters and understands their frustrations at a special time of year when fans look forward to attending and watching football games,” a statement said.

“While recognising a number of clubs are experiencing COVID-19 outbreaks, it is the clubs’ and the league’s collective intention to continue the current fixture schedule where safely possible.”

Watford have already had games against Burnley, Crystal Palace and Wolves postponed because of a Covid-19 outbreak.

The two latest postponements mean there have been 12 top-flight games called off because of an increase in coronavirus cases and the likelihood is that there will be more.

Everton boss Rafael Benitez said he was surprised his side’s game at Burnley was still on.

“After the last game [against Chelsea] we found that we have five positives,” said Benitez. “With the injuries and the positives that we had, we were expecting that the game would be postponed like in a lot of games.

“Now I have to think if I have 11 players fit and where I can put them. I am really surprised we are playing this game.”

The Spaniard added he had nine fit outfield players, three goalkeepers and five youngsters for the match. “It’s a massive risk to the players and not fair.”