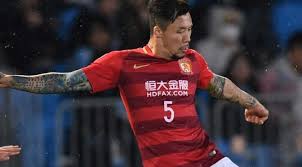 December 30 – Chinese authorities have banned national team players from sporting tattoos in order to set a “good example for society” – and will kick them out if they don’t oblige.

General Administration of Sport of China (GAS) said the players “are strictly prohibited from having new tattoos, and those who already have tattoos are advised to remove them themselves.”

“If there are special circumstances agreed by the team, (players) must cover up the tattoos during training and matches.”

Tattoos have increased in popularity in China among young adults including a growing number of high-profile Chinese players such as international defender Zhang Linpeng (pictured), who has previously been told to cover up while appearing for both the national team and club side Guangzhou FC.

Players in the national team have previously been seen with tape covering any visible tattoo areas but will now have to go through the painful process of removing them altogether.

The GAS went on to add that China’s national teams, through all the age groups, should organise “ideological and political education activities” that would “strengthen the patriotic education” of its players

The statement is headed ‘Suggestions for strengthening the management of football players’.