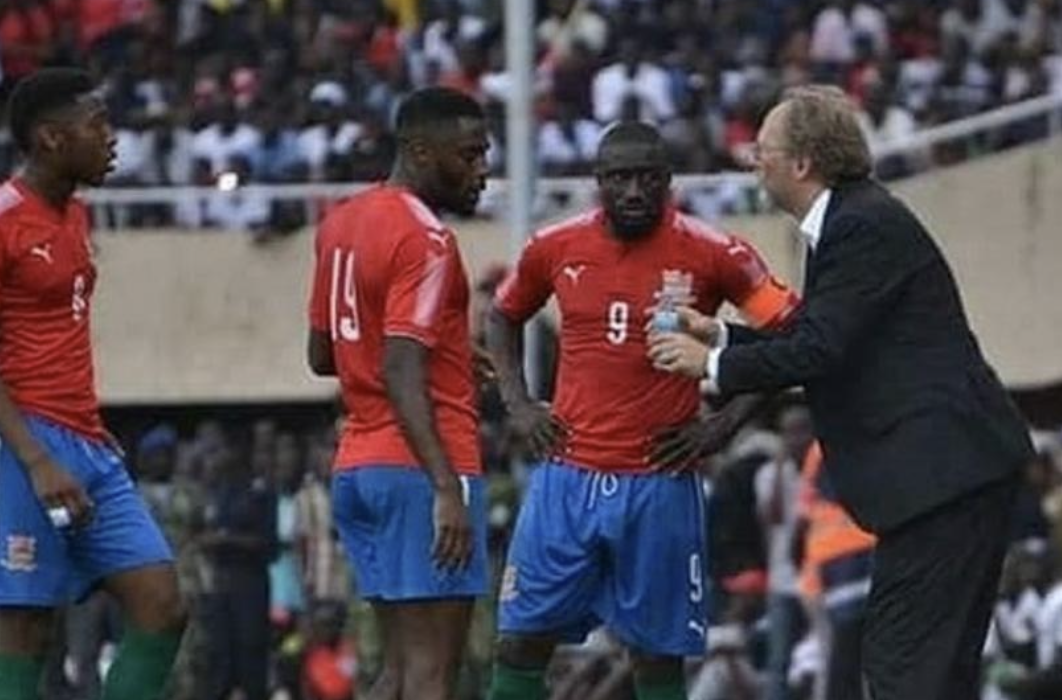 January 5 – Gambia coach Tom Saintfiet sighs at all the adversity. His Scorpions will participate for the first time in the Africa Cup of Nations in Cameroon, but in an interview with Insideworldfootball, he explains how the debutants’ preparations have been derailed by Covid-19 infections, cancelled friendlies, injuries and the late release of European-based players.

The Gambians landed on December 28 in the Qatari capital Doha for a 10-day camp to prepare for their first continental finals, but they soon had to cancel friendlies against both Algeria and Syria due to an outbreak of Covid-19. By Tuesday, five players of the 28-man squad had contracted the coronavirus as well as eight members of staff.

“It’s catastrophic at the moment,” Saintfiet told Insideworldfootball. “The majority of our positive tests originated in Gambia and they tested positive two days after arrival in Doha. One infection occurred in Italy. The virus spreads because you are on the bus together, you eat together. This has a lot of impact.  You never have your entire squad available.

“We had to cancel our two friendlies, which were crucial. It is not an ideal preparation. It is about pulling through and hoping that we can get as many players as well as technical staff healthy to Cameroon.”

Sometimes Saintfiet had just 12 or 14 players at his disposal on the training pitch. He lambasts the decision by FIFA and the Confederations of African Football (CAF) to alter the release date for players at the eleventh hour, caving to pressure from European clubs, and thus complicating any bubble concept African teams had planned on.

FIFA rules stated that clubs had to release players by December 27 for the tournament, which starts on Sunday in Cameroon, but a letter from the world federation to the World Leagues Forum said CAF had agreed that players could turn out in official games for their clubs up to 3 January.

“This decision is taken in the spirit of goodwill and solidarity,” said FIFA. But it can’t count on the goodwill of Saintfiet.

“The FIFA and CAF rule was ridiculous and without any respect or understanding for African football,” says the Belgian coach.

“On December 30, we had to submit the 28 names to CAF, but without the option of later changes. Some of the players were however only released on January 3. Those players can get infected, injured. We can’t work, we can’t form our team, we can’t create our bubble. In every aspect, that FIFA rule didn’t help at all. It had a very negative effect on the preparation for all Africa Cup of Nations participants,” he continued.

“If we had been able to gather on December 27, with everyone tested and in our own bubble, that would have been ideal. Due to this FIFA rule, no one has been able to prepare properly.”

On Wednesday, the Gambian delegation flies back home, on a chartered flight via Bulgaria. Players in quarantine in Doha will only be released after a negative test.  After an official function in Banjul, the team will travel to Cameroon on January 7.  Five days later, they open their campaign in a crunch match against Mauritania in Limbe. Heavyweights Tunisia and Mali complete Group F’s line-up.

“Tunisia and Mauritania have played the Arab Cup,” says Saintfiet.

“They have more experience and enjoyed longer preparations. We are the underdog. We are the lowest-ranked country in the group. We are debutants in the Africa Cup of Nations. Tunisia always plays to be champions. Mali can also reach the last four and still reach the World Cup. In the last few years, Mauritania has developed strongly,” he said.

“But at this moment I am not worried. I first have to check who will be available on match day and if we then have a team to defend our country and get as good a result as possible, but my main concern is the health of both my players and staff.”