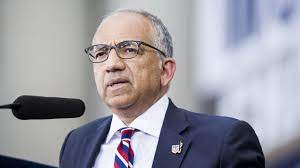 January 6 – Former US Soccer Federation president Carlos Cordeiro is bidding for a comeback, having announced his candidacy for the presidential elections that will be held at the USSF National Council meeting this March.

Cordeiro resigned from the USSF presidency in March 2020 following furious criticism of language used in a legal filing by the US federation in the equal pay case brought by its women’s national team.

While he might have been out of the administration of the US game, he has still been very involved with international football as an elected member of Concacaf’s board and last year becoming an advisor to FIFA president Gianni Infantino working within the group examining the international calendar and, in particular, how it impacts the global commercial expansion of the game.

To return to the presidency of the USSF, Cordeiro will have to beat Cindy Parlow Cone who took over as interim from Cordeiro on his resignation.

The decision to run again is only a recent one by Cordeiro, who says he was motivated by the number of US stakeholders who had written to him encouraging his return.

To make it a reality he has in somewhat typical style, addressed the elephant in the room of the women’s equal pay dispute head-on and with a substantial amount of contrition.

In a letter to USSF members he, not for the first time, recognises “the inexcusable and offensive legal filing that caused so much pain, especially for our incredible women’s players.”

The filing was not read by Cordeiro before it was submitted and he has no problem owning that error, saying that he would never have allowed such wording to be submitted, but with it having gone and “given the severity of what happened, words of apology were clearly not enough… I believe that resigning was in the best interests of U.S. Soccer at that moment.”

Certainly his resignation brought the issue into clearer focus, but it did still not find a pathway to resolve the legal dispute or the wider issue of equal pay.

“There has to be an immediate resolution to the litigation,” said Cordeiro.

“We have to get past the litigation and these huge costs. Being away from the day-to-day of the federation has given me time to reflect,” he continued.

“The solution (to the equal pay issue) is not to take money away from existing programmes like coach education or licensing. We can’t cut these essential activities, but we can borrow a little bit from the UEFA play book, and generate new money for the women’s game and use that to settle the litigation and build an equitable platform for the future. I am confident we can do that.”

“We have to look for new resource…it can’t be cannibalism of existing (revenues),” he emphasised.

While the NWSL (the pro women’s league in the US that is dealing with its own governance challenges) has had made steps to addressing the sponsorship opportunity, Cordeiro says that it is the federation’s role to drive the programme and ensure that the opportunity is opened to a wider football community.

A big part of Cordeiro’s vision for the future of US Soccer is for the US and North America to be a leader in global football rather than a follower.

The World Cup in 2026 that is being co-hosted by the US, Mexico and Canada, is a huge opportunity for that vision to become a reality. Cordeiro, who co-led the bid team, says that it must also be used by the USSF to drive the game for its members.

“2026 is the most important (football) opportunity ever for my country and for the next generation. This is going to drive education, sponsorship, participation, fans – it is all circular. We must have strong leadership to make something of this,” he said.

He also sees 2026 as a springboard for bringing more major international football to the US, and in particular a Women’s World Cup to build what would become a decade of major football events.

It is this vision of creating an inclusive environment for the world’s biggest football events that drives Cordeiro, and he includes hosting Futsal and Beach Soccer within that ambition, and connecting those disciplines closer to the 11-a-side game.

There is no doubt that with Cordeiro’s exit from the USSF, the US lost influence in the power circles of the global game, including a voice that was listened to at the top table. With the US leading the hosting of the expanded 2026 World Cup, there has been something of a vacuum, at least in terms of international representation, at the top of the US federation.

Cordeiro’s point, and it is a big one for the US domestic game, is that the land of opportunity that the US presents for the rest of the world must also be made a game-changing opportunity for those who live and breathe the game in the US.

“I want to balance the centre of gravity away from an overpowering European dominance and make North America a global power,” he says.

Come March the US federation’s stakeholders will decide on who leads the US federation into the 2026 World Cup and beyond. It is an important decision for the future of US Soccer and the grasping of the opportunity that sits in front of it right now. It also has ramifications for regional and global football.