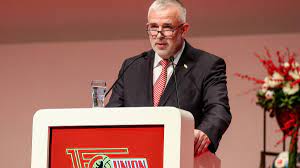 January 6 – The president of Bundesliga team Union Berlin has got tongues wagging in Germany by accusing politicians of using Covid restrictions around football to further their own agendas.

“Politics often uses symbols during the pandemic, under the motto: ‘We have to do something visible’ and football stadiums lend themselves to that,” Zingler told magazine Sport Bild.

He believes German politicians have fallen “into the habit of using the power of football to transport their own ideas, their own political goals, through the media.

“Football is letting itself be used,” he claimed.

The Bundesliga resumes this Friday after a two-week break with most top-flight games across Germany being played in empty stadiums.

Leaders Bayern Munich are due to play Moenchengladbach away on Friday with eight of their star-studded squad having tested positive.

Zingler argues that playing Bundesliga matches behind closed doors does little to curb the spread of the virus.

“Football stadiums are a natural target (for politicians), because football has a wide reach. But it is dishonest to point to the stands as a place of contamination.”

He says the spectator ban is counter-productive since fans are “out in the fresh air” and would have to be fully vaccinated anyway to attend.

“What happens? We empty the stadiums and send people home or to the pubs, where they then sit together and watch the game.”