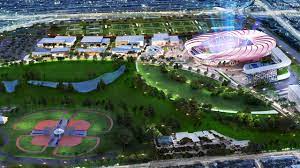 January 7 – MLS club Inter Miami CF look to have finally struck a deal for the site and build of a new soccer-specific stadium with the City of Miami, according to local media reports.

However approval for the development at Miami Freedom Park has still to be signed off by a vote by the city commission. As well as a 25,000-seat stadium, the proposed development includes an office park, hotel, and retail complex spread over 73 acres.

Inter Miami was formed in 2018 with David Beckham as a lead owner as part of the fulfilment of his MLS playing contract that gave him an option to own his own franchise at a knockdown price.

While his team, co-owned with local construction entrepreneur Jorge Mas, started play in 2020, it was still looking to find the Miami base it aspired to for the franchise.

Home is currently in Fort Lauderdale at the old 18,000-capacity Lockhart Stadium – now called the DRV PNK Stadium. The plan is to eventually move the first team to playing in Miami but keeping DRV PNK Stadium as a training facility and base for the third tier MLS Next Pro team.

The Freedom Park development will be on land currently occupied by the Melreese Golf Course and Country Club. Total cost of the development is about $1 billion.