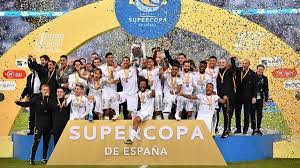 January 10 – Amnesty International is calling on the four clubs involved in the Spanish Super Cup in Saudi Arabia this week to take a stand over women’s rights and equality issues.

Real Madrid, Barcelona, Atletico Madrid and Athletic Bilbao will compete in the revamped Super Cup in the Saudi capital Riyadh from January 12-16 after the Spanish FA agreed a contract with the Saudis until 2029 that will earn the governing body €30 million a year.

Amnesty has sent the clubs and the Spanish FA purple armbands and asked the team captains to wear them during the tournament as a show of solidarity.

“We are asking your organisation to honour its commitments and responsibilities to human rights,” Amnesty urged the clubs in a letter sent last week and seen by Reuters.

“Your club has an opportunity to take advantage of the tournament to make human rights concerns visible in Saudi Arabia. We invite your captain to wear the armband either during matches, or at events around the tournament such as press conferences, training sessions and other public exhibition spaces, including social media.”