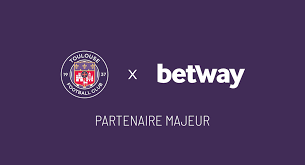 January 10 – Online betting sponsorship is still holding its own in the sponsorship market with Betway announcing a two-year major partnership with French Ligue 2 side, Toulouse FC.

The deal will give the online bookmaker a presence on Toulouse’s kit as well as brand exposure around the Stadium de Toulouse on LED boards and panels.

Toulouse will also have a package of digital content and media activation.

It is Betway’s first French club sponsorship. No value was given for the deal.

Anthony Werkman, CEO of Betway, said: “The club has a great history and has ambitions to get back into Ligue 1 and we look forward to supporting them on their journey.”

Furthemore, Betway will also have a presence on the players kit which has been promised for at least the next two years, whilst the partners will also deliver social media and digital content.

Olivier Jaubert, General Manager at Toulouse Football Club, added: “This is a key milestone that Betway joins us on a multi-year agreement to support the growth of the club and be part of our ambitious journey. We are also very proud to be the first club chosen by Betway in France and we will work closely with them to offer the best activation and implementation of this partnership especially to all our fans.”