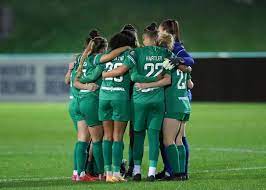 January 10 – The fragility of the finances in the lower tier of the women’s professional game were demonstrated last week with the last-minute takeover of Coventry United Ladies, who play in the FA Women’s Championship.

Before Christmas the club announced they were going into voluntary liquidation before Lewis Taylor, CEO of energy company Angels Group, came in with a funding plan save the club. No figures have been released.

This was not before the club, who were already at the bottom of the 12-team championship, were handed a 10-point deduction for triggering the insolvency proceedings. Taylor has said he will appeal the points sanction that leaves the club on -4 points and 10 points off the next placed club Watford.

Angels Group is already involved in the women’s club game as a sponsor of Wolverhampton Wanderers, but as an owner, Taylor has ambition to push Coventry United higher up the league and into the top tier Women’s Super League.

“We’ve already had confirmation from the FA that the player’s and staff’s contracts will be retained,” said Taylor.

“There’s been a pandemic, finances have been tight for clubs but we feel we have a platform to build on and get the club to the Women’s Super League. We want to see Coventry United Ladies on TV each week.”

The first step has been to ensure the players get paid and contracts are fulfilled. Having been told they would be without jobs before Christmas, a number have already attracted attention from other clubs.

The FA still has to rubberstamp the acquisition of the club by the Angels Group which is expected to happen this week assuming Taylor and the Angels Group pass integrity tests. No value has been given for the deal. Crucial to the investment and the opportunity for the club will be some relief from the points deduction.

The Coventry women’s team has had something of a nomadic existence since foundation in 1991. In 1997, as Coventry City, they won promotion to the old Premier League Northern Division and in 2004 began to build a relationship with men’s Championship club Coventry City. In 2015 they changed name and merged with non-league side Coventry United in 2015.

It has been a long journey to stability. In 2021 Steve Quinlan, Paul Marsh and Darren Langdon bought a 49% stake in the club and plans were announced to turn full time professional for the 2021-22 season. However, that only lasted until December 24 when they were placed in voluntary liquidation.

The top tiers of the English women’s league resumed last weekend after their winter break. Coventry’s game was called off due to a covid-19 outbreak, as were three games in the Women’s Super League.