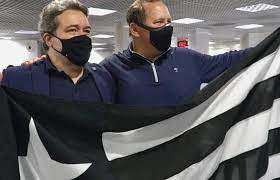 January 11 – Crystal Palace co-owner John Textor will become the owner of Botafogo, the president of the Brazilian club Durcesio Mello announced on Monday.

Mello said that Textor (pictured right) is to become the club’s new boss, bringing to an end prolonged speculation over Botafogo’s fate.  The American technology magnate Textor had been linked to the Rio club for weeks and last Friday he arrived in Brazil to finalise his takeover.

Brazilian media Globo reports that Textor will acquire 90% of the club shares, with Botafogo retaining the remaining 10%. That split will also reflect a new legal structure for the club with the football department integrated into a limited company, Eagle Holding, whereas the other sports will continue in a non-profit organisation, Botafogo FR.  Textor is to invest €62 million (400 million reais) of which €15.5 million is available to the club immediately.

Last August, he bought an 18% stake in London club Crystal Palace, but his attempt to purchase a quarter of shares at Portugal’s Benfica has not yet been successful. However, he views his network of clubs as an important part of what he wants to achieve with Botafogo.

“It’s a relationship, not necessarily a multi-club property,” said Textor in an interview with Globo. “City Football Group did not place this group of big clubs. I hope Botafogo will work in partnership with other clubs on the same level, like Benfica. This never happened before.

“No club should be just a satellite for another. Every club is important for its fans, for its country. Why would I do that? It has no logic. When we talk about collaboration, it gives more opportunities.”

In a statement, Botafogo said that the takeover is subject to by the club’s administrative board and the shareholders.  But that will be a mere formality. Botafogo has long been struggling and Textor has been welcomed as a saviour by the fanbase that has longed for the club to be restored to its former glory.

In the ’60s, Botagofo was, alongside Pele’s Santos, one of the best club sides in the world, boosted by two generations of formidable players. First, Garrincha, Didi and Mario Zagallo played their way to greatness with Botafogo before the generation of Jairzinho and Gerson stepped in to flourish and add more silverware.

In recent times the club has not been able to replicate those heights. They were relegated in 2020 but clawed their way back to the topflight last year.  With two games remaining in the season, Botafogo clinched the Serie B title following a 2-1 rearguard win against Operario.

Botafogo’s last won the top-flight title in 1995 and the club has never been far away from bankruptcy, burdened by almost 160 million euros of debts. Late last year, the club drew up a plan to pay off 28,7 million euros in labour debts in the course of the next decade. Those debts, which mean that at least 20% of the club’s revenues will be compromised until the huge debt is paid off, didn’t scare Textor. He said: “If you look at the revenues of a football club in Brazil, this debt would scare you. But the impact that the club can generate is much bigger.  We can engage our fans, our audience, in a very profitable way. Look at Manchester United, for example, who have a very loyal fan base on a global scale, but fail to reach their full potential in terms of their business model.”

“A club like Botafogo, with millions of fans, gives many opportunities. Where there is that kind of passion, there is room for growth. And there is no debt too high for a global business model. It’s a huge debt for a club here, but the government made a law, which has made it possible to pay off that amount.”

Textor’s arrival is a landmark moment for the Brazilian game. Red Bull aside, he is the first foreign owner in the Serie A, a league that has traditionally had little traction with both domestic and foreign owners.

Brazilian clubs are traditionally non-profit organisations, which doesn’t allow investors to come on board, but both Cruzeiro and Botafogo have adopted new legal structures, becoming companies, to address their dire financial and sporting predicaments.