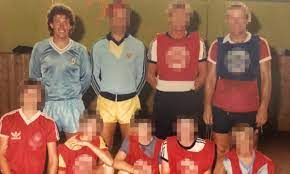 January 11 – Eight men who sued Manchester City after claiming they were abused by notorious paedophile Barry Bennell more than 30 years ago have lost a High Court battle.

The men, now in their 40s and 50s, said Bennell (pictured in Man City kit) abused them when they were playing schoolboy football for teams he coached in North West England between 1979 and 1985.

Bennell is serving 34 years in prison after being found guilty in 2018 of a string of child sexual offences carried out between 1979 and 1991.

The men claimed City, referred to as MCFC, was vicariously liable for the harm they suffered, which the club denied.

But Mr Justice Johnson ruled that the connection between the abuse and Bennell’s relationship with City was insufficient to give rise to vicarious liability.

Mr Justice Johnson also ruled that the claims were brought too late to result in a fair trial.

He said that, while each of the claimants had a “good explanation” for the delay, the evidence was less clear than it would have been had the claims been brought in time – in part because a key witness died in 2010.

“It is not fair, after all these years, to reach a binding determination on MCFC’s responsibility for the abuse based on the partial evidence that is still available,” the judge said. “I therefore dismiss each claim on the ground that it is out of time.”