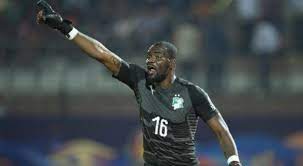 January 12 – Ivory Coast’s AFCON hopes have been dealt a potentially damaging blow with their No. 1 goalkeeper Sylvain Gbohouo banned by FIFA for an alleged doping violation after testing positive for trimetazidine.

Gbohouo (pictured), who had been expected to be first choice for his country in Cameroon, had already been temporarily suspended but was in the squad anyway hoping for a reprieve. The Elephants face Equatorial Guinea in their first game tonight.

FIFA didn’t give any more details about the ban, saying it couldn’t comment further because “proceedings are ongoing”.

Gbohouo, who plays his club football in for Ethiopia, started for Ivory Coast in the recent World Cup qualifiers in October and November. He was one of four goalkeepers selected in the squad for the African Cup of Nations.

National team coach Patrice Beaumelle was notified on December 26 that Gbohouo had tested positive for trimetazidine, a heart medication that the World Anti-Doping Agency categorises as a stimulant.

Beaumelle said the player, who was part of the 2015 Nations Cup-winning squad, was training alone, had lost weight and “is not sleeping”.

“It’s been really difficult for the player,” the Frenchman, who was appointed in March 2020,  added. “He’s been here since January 5 not knowing if he’ll be able to play. He’s not eating anymore, he’s lost weight, he’s not sleeping.

“I hope he stays with us, because I think he has an important role to play around the team if he can’t be in the team. He’s a great keeper and an excellent person. It’s really hard for him and his family and we are all supporting him because his career isn’t finished.”