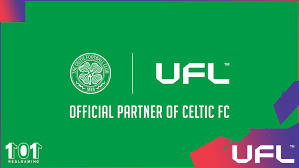 Strikerz is creating a network of clubs and has already announced partnerships with West Ham, BorussiaMönchengladbach, AS Monaco and Beşiktaş JK, and license agreements with Sporting CP and Shakhtar Donetsk.

Adrian Filby, Celtic F.C. commercial director, said: “We are delighted to partner with Strikerz Inc. for the exciting launch of their new-to-market UFL video game. Celtic gaming fans from all over the world will have the chance to play this new title and have their club represented and fully licensed in it.”

UFL has been in development since 2016 and will next month reveal a number of gameplay features. The game willbe available for free with new features and updates added regularly with no mandatory payments or annual fees.

Strikerz said the game is designed to be a fair-to-play experience emphasising a skill-first approach with zero pay-to-winoptions.

“Celtic F.C. epitomises the spirit of the game,” said Eugene Nashilov, CEO at Strikerz Inc., after signing the deal. “They forged their success through tireless hard work and made their name heard everywhere from the terraces ofGlasgow to the shores of Australia. That’s a perfect example of what we’re trying to achieve with UFL – and what weexpect from our players.”