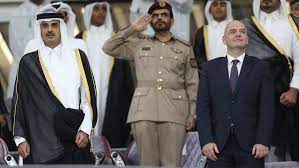 January 17 – With friends in European football few and far between, and the authorities in his own country of Switzerland ramping up their criminal investigation into him with the appointment of two special prosecutors, FIFA president Gianni Infantino appears to have decamped to Doha, Qatar.

Infantino, according to Switzerland’s Sonntags Blick, has moved his family to the Qatari capital with him, is renting a house and has two of his daughters in school there.

The FIFA president, whose fondness for private jet travel on FIFA’s account, has been well documented since he took power in 2016, does have an impressive international travel schedule that was been barely impacted by the covid pandemic. However, the hub for his travel now appears to be Qatar rather than FIFA’s Zurich headquarters.

Sonntags Blick has tracked Infantino’s everyday movements and found that he began spending disproportionately more in Qatar from October of last year and that in November and December last year he operated there almost exclusively, with FIFA insiders confirming he is rarely seen in Zurich.

Instead the FIFA boss was mostly in the Qatari capital, seen hobnobbing with the Emir of Qatar, enjoying the Formula 1 race in Doha, and being present throughout the Arabian Cup.

The question quickly becomes that if Infantino is not overseeing his 1,000-plus staff from FIFA’s Zurich headquarters, who is?

FIFA maintains that Infantino is still a Swiss resident and paying Swiss taxes. And FIFA did state towards the end of 2021 that its president had elected to spend more time on the road, and in Qatar, as he took the World game to the world.

Having failed to raise new money for FIFA with a failed £25 billion sell-off of rights (pretty much all of them) and an expanded Club World Cup that looks to have been shelved, at least for now, Infantino has put his reputation and his FIFA future behind his latest proposals for a biennial World Cup.

Moving to Qatar – the first time any FIFA president as moved their primary residence and place of work away from the Swiss headquarters – has been argued by FIFA as allowing him to be closer to the nation that will host the next World Cup this November/December.

The reality is that Qatar doesn’t need FIFA’s help to organise the 2022 World Cup. The stadia are ready, so is most of the country’s impressive infrastructure, and Qatar, its local organising committee and its FA, has repeatedly proved that it can run major sports and football events.

The country is packed full with very competent event and media organisers. Indeed, it is currently the first port of call for many confederation organisers seeking a safe venue to get events played.

Being FIFA president inevitably means a seat in the hot sun of media and global football focus. Now Infantino has made the move more literal.

This is a FIFA president who has needed a lot of protection during his terms in charge, much of it coming from within his own organisation, especially the unprecedented support and lobbying over the criminal investigation into his personal behaviour. Even so, he will still need a lot of protection as moving to Qatar will not keep him out of the sun.