January 18 – An economic and social impact report highlights the contribution of the Premier League to brand Britain, as well as the important social role it plays within the UK and in England in particular.

The EY study covers the 2019-20 season that was the first to feel the effects of the global pandemic with a lockdown than closed stadia in March 2020 and forced the season to be completed during the summer behind closed doors.

Even so the report shows the Premier League still contributed £7.6 billion to the UK economy in pandemic-struck 2019/20 season, with £3.6 billion paid in tax contributions.

With foreign owners dominant within Premier League clubs (15 of the 20 clubs are majority controlled by non-UK owners), and the clubs being the joint ‘owners’ of the league, any thoughts of a proposed government imposition of a football regulator and that regulator’s remit, will likely need to be carefully balanced against ‘Brand Britain’ considerations and the value of the Premier League to a wider social, job and tax generating economy.

The report highlights the Premier League as a major British business success story with economic activity having grown by 840% since the 1998-99 season. Of the £3.6 billion paid in tax in the 2019-20 season, £1.4 billion was accounted for by Premier League players. The total tax contribution underpinned by clubs has increased by £3.1bn since 1998-99.

“This new report from EY shows how we and our clubs continue to contribute significantly to the UK economy and have delivered much-needed assistance to all levels of football and communities at a time when the pandemic brought unprecedented challenges and uncertainty for so many,” said Premier League Chief Executive Richard Masters.

“We are proud of the level of support we provide the football pyramid, as well as funding community organisations of clubs up and down the country. The importance of their work has been more evident than ever in recent times, providing help to people who needed it the most… This success and popularity (of the Premier League) enables us to continue investing in the competition and provide unparalleled support to the whole game and communities, ensuring the positive impact of the Premier League is felt far beyond what we see on the pitch.”

The report finds that 94,000 jobs are supported by the Premier League across the UK. With the UK economy still dominated by London and much talk in the country of a ‘levelling up’ geographically of the economy, the Premier League is already there with the league’s benefits spread throughout the country.

All nine major regions in England were represented by at least one Premier League club in 2019/20 and 72% of the League’s economic activity was generated outside of London. The North West and London generated equal amounts of £2.1bn in Gross Value Added (GVA) and 21,000 jobs. 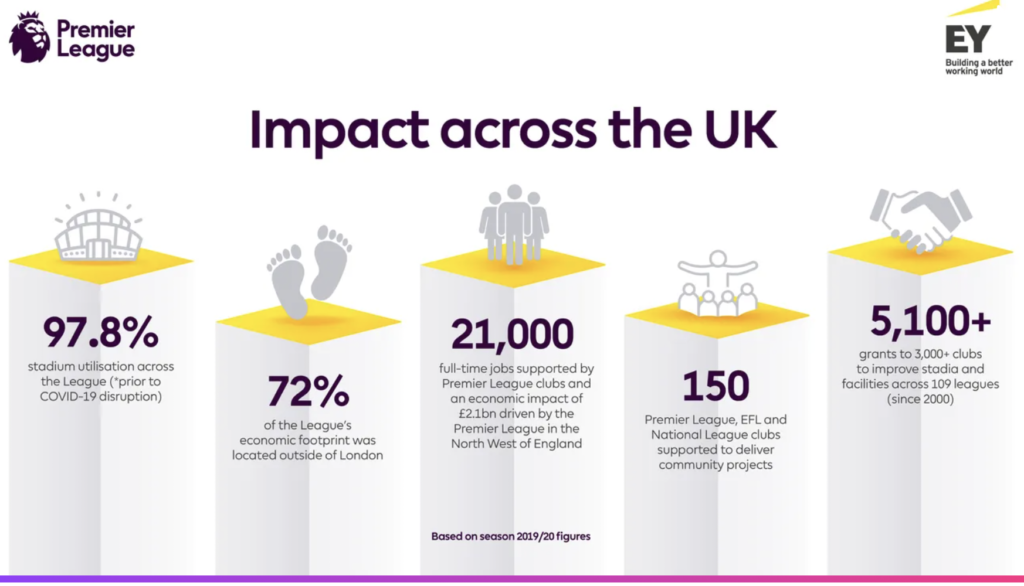