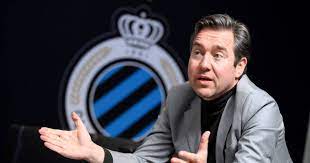 January 18 – Club Brugge’s Vincent Mannaert (pictured) has retained his six-month mandate to lead the Pro League, even after he was named as one of 57 suspects in operation ‘Clean Hands’.

On Monday, the board of directors of the Pro League confirmed that Mannaert, along with Anderlecht’s Wouter Vandenhaute, will lead the Pro League for the next six months after chairman Peter Croonen stepped down.

The choice for the duo was seen as strategic. They are seen as heavyweights in the Belgian game with the necessary command and experience to negotiate with the government over fiscal reforms that would adversely affect the game.

However, the Club Brugge strongman has been named by the federal prosecutor in the largest investigation into match-fixing and corruption in the history of Belgian football. He is charged with forgery and the indictment chamber will decide if Mannaert will have to go to court. Club Brugge president Bart Verhaeghe is also among the dozens of top officials that the federal prosecutor wants in court.

The investigation has cast another dark shadow over the Belgian game, but the Pro League considers Mannaert as essential to “help prepare the future of Belgian football.” He will however work behind the scenes and leave the front office to Vandenhaute.

In a statement, the league wrote that “In the first place, the mandate should lead to a restoration of confidence in our football, both internally and externally. The Pro League is in for fierce months. She has to look for a new CEO and a new chairman, and has to intensify discussions with the government about, among other things, safety in the stadiums, combating racism, dealing with and the consequences of Covid, and the new (para) tax rules.”

CEO Pierre Francois has stepped down. His mandate was due to end in June, but he believes that his role has become redundant. He said: “During these seven years I gave everything for Belgian football and I was prepared to guarantee continuity until the arrival of my successor, but with the special mandate of Wouter Vandenhaute and Vincent Mannaert this is no longer necessary.”

AA Gent’s Michel Louwagie and Standard Bruno Venanzi have temporarily relinquished their roles as Pro League representatives. They were both named by the federal prosecutor.