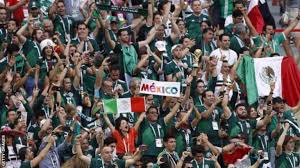 January 20 – The Mexican Federation (FMF) has issued a warning that it will act more forcefully to put an end to homophobic chants that have blighted many of its national team matches and resulted in sanctions forcing home games to be played with closed stadia.

Now the federation has said that fans engaged in the homophobic chant will be identified and given five-year stadium bans.

“We cannot tolerate discriminatory acts, we cannot play in empty stadiums, we cannot run the risk that the football authorities will take points away from us,” said Yon de Luisa, president of the FMF.

The bans will apply to all games in Mexico.

To help enforce the rules against homophobic chanting and to identify individuals, spectators will now have to book their sears online and bring an identity document with their tickets to the stadiums.

The FMF said that there will also be additional security guards deployed to identify and eject supporters who commit any discriminatory act.

“Our objective is to put an end to discriminatory acts, that our national team no longer suffer the consequences and that those responsible are punished, and not the majority of our supporters,” said de Luisa.

Mexico has had a long history of battling against the ‘puta’ chant that has traditionally been aimed at goalkeepers when taking a goal kick and has different variations, though none with homophobic overtones, in other countries.

The incidents in question date back to matches against both the Dominican Republic and the USA. FIFA also slapped the FMF with a $65,000 fine.

“The risk of the 2026 World Cup exists if this does not stop now,” said FMF chairman Yon de Luisa in June last year. De Luisa is involved in organising the North American World Cup that will be staged by the United States, Canada and Mexico.

“How can we host a World Cup if we are going to have our stadiums empty?” he asked. Mexico will host 10 games across three venues.

“If we don’t stop this now, the effect it can have on the football industry in México can be devastating. I hope this is the first and last sanction that FIFA imposes.”

The ‘puta’ chant has not been confined to stadia in Mexico, with the large number of Mexican fans based in the US also taking up the chant when the team play in the US.

At last year’s Concacaf Nation League and Gold Cup finals, the confederation took the bold step of introducing FIFA’s three-step protocol that sees matches paused once chanting is identified, followed by teams being removed from the pitch with the game suspended and in the worst case even abandoned.

Ahead of each match videos were played explaining the protocol and at the Gold Cup the Mexican team ended their pre-match warm-ups with an address from the pitch to fans to show respect and allow them to play the game without unnecessary interruption.