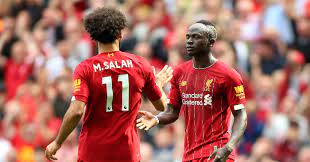 January 23 – Egypt vs Senegal and Nigeria vs Ghana will headline Africa’s World Cup playoffs to decide the continent’s five representatives at the finals in Qatar.

Former Liverpool forward El-Hadji Diouf was among those deciding the fate of the ten nations competing in the final round of African World Cup qualifying, and his picks left Liverpool’s current star strikers Sadio Mane and Mohamed Salah on collision course for one of the five coveted tickets in Qatar.

In Russia, the Egyptians returned to the World Cup for the first time in 28 years, but they finished bottom of Group A without a single point.

Nigeria vs Ghana will be the other heavyweight clash of the African play-offs. The two countries were paired on the day that the Black Stars dismissed their coach Milan Rajevac after their humiliating first-round exit from the Africa Cup of Nations. The Ghanaians endured a lacklustre campaign in Cameroon, registering just one draw against Gabon in their three matches. Their 3-2 defeat at the hands of debutants Comoros will go down as one of the great shocks in the competition’s history.

The Nigerians’ preparations for the finals were chaotic with the dismissal of longstanding coach Gernot Rohr, but they impressed in the group stages and on current form they will be favourites to clinch a ticket for Qatar. The Super Eagles have been at every World Cup since USA 94, with the exception of Germany 2006.

Current Africa Cup of Nations hosts Cameroon missed out on the last World Cup and they will meet Algeria in the playoffs. The Algerians were the other powerhouse to depart the continental finals early. The defending champions finished bottom of Group E behind Ivory Coast, Sierra Leone and Equatorial Guinea. The North Africans last participated in the global finals in Brazil in 2014 when they took eventual champions Germany all the way to extra time in the last 16.

Morocco will face DR Congo, who failed to qualify for the Africa Cup of Nations in a group with Gambia, Angola and Gabon. In the final playoff, Mali and Tunisia meet again. The pair were involved in one of the most controversial group-stage matches in Cameroon when Tanzanian referee Janny Sikwaze repeatedly blew the full-time whistle before the 90 minutes were up. Mali won the match 1-0 and they will be hoping for a similar outcome in two months time. The country has never qualified for the World Cup.

The playoffs will be played on a home-and-away basis, with the World Cup draw set for April 3 in Doha.

At the last World Cup,  Africa’s five teams were all eliminated in the first round.