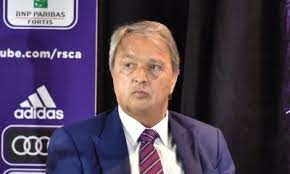 January 25 – Former Anderlecht manager Herman Van Holsbeeck will remain in prison for another month in an investigation into fraud and corruption centring on agent Christophe Henrotay.

His lawyers had demanded Van Holsbeeck be released but judicial authorities denied the request.

Van Holsbeek is suspected of corruption, fiscal fraud, money laundering and taking part in a criminal enterprise, according to Belgian media. The case dates back to 2019 when Henrotay was arrested in Monaco, suspected of money laundering, bribery, forgery and taking part in a criminal conspiracy over transfers involving Aleksandar Mitrovic, Chancel Mbemba and Youri Tielemans.

Van Holsbeeck is said to have accrued retro commissions. At the time, Van Holsbeeck was also detained but released, but the case has come back to haunt him. He stands accused of swindling current Anderlecht owner Marc Coucke. Van Holsbeeck had promised Henrotay €3 million if Anderlecht was sold. Henroty and Van Holsbeeck, Belgian media say, allegedly drew up false contracts to get €2 million from Coucke.

His detention is not related to operation ‘Clean Hands’, the investigation that has engulfed and exposed top administrators, officials and referees, and is rapidly becoming the largest investigation into match-fixing and corruption in the history of the Belgian game. However, Van Holsbeeck was also named in this investigation as one of 57 suspects by the federal prosecutor.