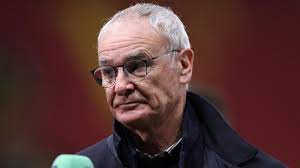 January 25 – Watford have dismissed coach Claudio Ranieri after a three month, 14-game tenure that failed to reverse the club’s fortunes and has left the Hornets in the Premier League relegation zone.

The Italian was appointed in October, but last Friday Watford lost to fellow strugglers Norwich, dropping them into the danger zone – it was their seventh loss in the last eight league games. That negative run and the sense of malaise led to club to part ways with Ranieri.

“The Hornets’ board recognises Claudio as a man of great integrity and honour, who will always be respected here at Vicarage Road for his efforts in leading the team with dignity,” said a club statement.

“However, the board feels that, with nearly half of the Premier League campaign remaining, a change in the head coach position now will give a new appointment sufficient time to work with a talented squad to achieve the immediate goal of retaining Premier League status.”

Watford will play Burnley next in the Premier League on February 5, leaving the club’s board with time to appoint Ranieri’s successor. The Hornets sit in 19th spot with 14 points, just two points off red lantern Burnley and the bottom of the table.

Since November 2019, Quique Sanchez Flores, Nigel Pearson and Vladimir Ivic had all tried to bring a measure of stability to the club. Ranieri began his tenure with a 5-0 defeat by Liverpool, but he recorded his first victory in his next game against Everton.

The Italian has been a coach since the 80`s and achieved the greatest feat of his career in 2016 when he guided Leicester City to the Premier League title.