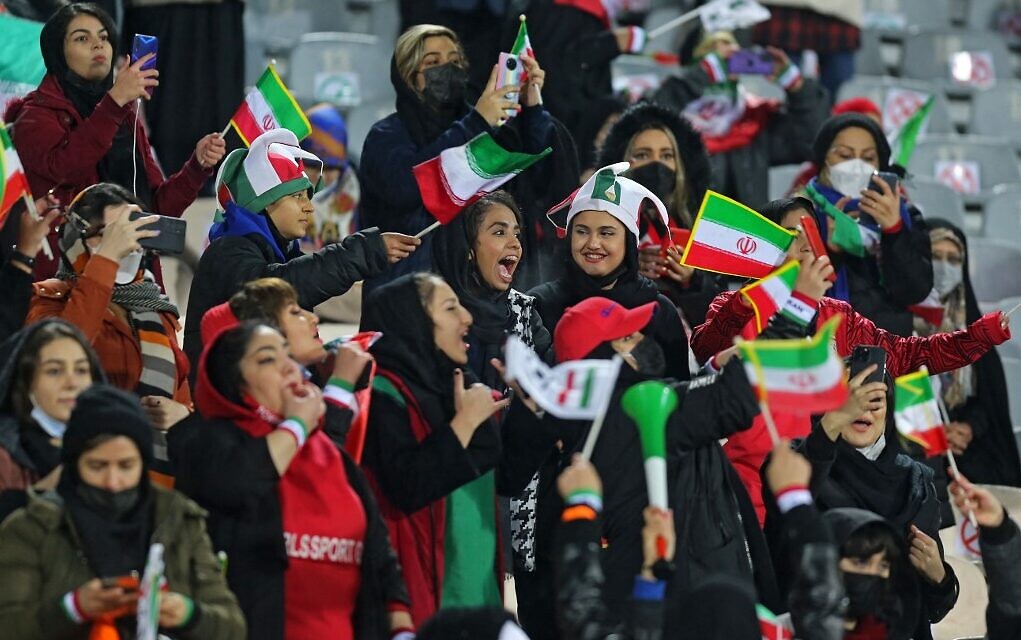 January 28 – Iran remain the flag bearers of Asian football, becoming the first Asian team to qualify for the World Cup after a 1-0 victory against neighbours Iraq at the Azadi Stadium, with a limited number of women in attendance.

Medhi Taremi, who almost missed the match because of a snowstorm in Istanbul, delivered the coveted ticket to Qatar with a strike early in the second half to ensure Iran’s third consecutive World Cup participation, and sixth overall.

It was Iran’s fastest qualification for the finals with nineteen points from seven games and still with three games to go. It also represents a triumph for their much-criticised coach Dragan Skocic, whose unassuming style differs so much from Carlos Queiroz, who led Team Melli to the last two World Cups and enjoys a god-like status in Iran.

Skocic took over when Iran’s qualification hopes looked dismal after Marc Wilmots’ maligned spell. Under Skocic, Iran has enjoyed a near-perfect record with 13 wins and one draw from 14 matches.  Against Iraq, they achieved their fifth clean sheet of the qualifiers.

There were many strands to Iran vs Iraq story. Eight of the visiting players tested positive, leading to an official complaint by the Iraqi football federation to the Asian Football Confederation (AFC) on Thursday about the results of the tests, conducted by an Iranian lab.

Four Iranians, including star striker Sardar Azmoun, also tested positive. Between the sticks, Amir Abedzadeh was picked over number one Alireza Beiranvand, which reportedly led to a bust-up with the coaching staff.  More importantly, this was the first national team match during the pandemic with supporters in the stands, including women.

Authorities allowed for 8,000 male fans, 2,000 female fans and 1,000 visiting supporters. It was the first time in three years that Iranian women have been allowed to attend a national team match. Previously, women have attended Iran vs Cambodia and Iran vs Bolivia, but in limited numbers as well.

However, controversy reigned over the distribution of tickets. On the morning of the match, the ticketing portal reportedly showed all tickets for women as sold out.

“From January 19th when the official numbers of fans were announced, we reached out to FIFA and raised our concerns that when Iran’s federation from the beginning started with discrimination in how many female fans can attend the match, there’s a fear that even they give this numbers to hand-selected female fans,” Open Stadiums, a movement of Iranian women seeking to let women attend matches, told Insideworldfootball.

“Last night (Wednesday), with less than 24 hours to the match the federation opened the website but until this morning (Thursday) there was no match to be selected and later the capacity for women was zero. It’s obvious that Iran’s federation is very good at manipulation and how to play with the media and FIFA’s mind by letting some hand-selected women in. We urge FIFA, now that Iran has qualified for the World Cup, that they should be strict about gender discrimination in Iranian stadiums and take serious action.”

The build-up to the match had been fraught with confusion as officials delayed a decision on allowing fans into the stadium because of the global health crisis. Shahaboddin Azizi Khadem, the head of Iran’s football federation, had announced FIFA chief Gianni Infantino would attend the match, but the Zurich supremo was not in Tehran.

In 2018, Infantino met with then-president Hassan Rouhani, who had promised that women would gradually gain more access to watch football matches. Since the Islamic revolution in 1979, women have been banned from football stadiums in Iran.

At the time of writing the Iranian Football Federation had not responded to queries from Insideworldfootball.