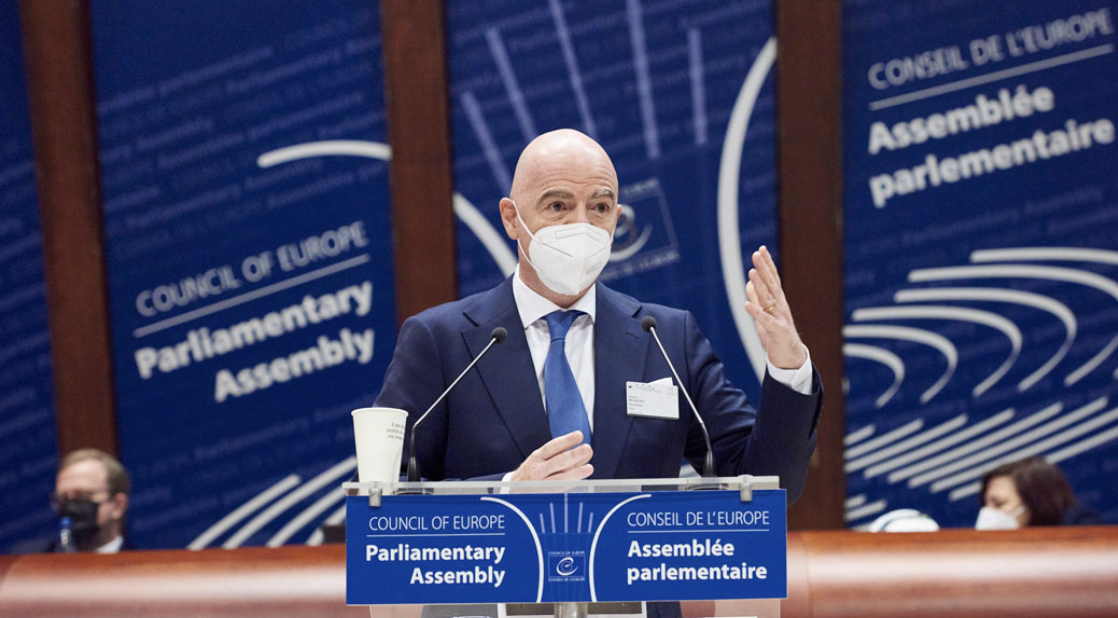 Of the three personality disorders frequently observed in psychology and psychotherapy, there is one that appears to apply to certain types of people often found in leadership positions (such as Trump, Johnson, and you guessed it: Infantino). The ones I am referring to here, are “Cluster B Personality Disorders”.

Psychology defines Cluster B as “The Dramatic, Unpredictable Cluster” because it includes such defining characteristics as

Cluster B Disorders are personality disorders that affect how people behave. People with Cluster B Personality Disorders are more likely to behave dramatically and erratically. They may seem like they need much more  (or much less attention)than other people. ‌Cluster B Disorders involve unpredictable, dramatic, or intensely emotional responses. Certain people with Cluster B Disorders avoid treatment because they don’t think anything is wrong with their behavior (such as juxtaposing an obsession – in this case the Biennial FIFA World Cup – with African migrants not having to die in the Mediterranean).That juxtaposition may actually qualify for a host of other issues as well, one of them being rampant ‘racism with a fake smile’.

Cluster B Disorders include Narcissistic Personality Disorder (NPD), which is the one I’d like to focus on for a moment: People with narcissistic personality disorder generally believe that they are better than others. They don’t simply have high self-esteem (“you know, don’t you, that I alone can fix FIFA’s corruption?”), but actively believe that they are more important than other people and should be treated that way (“where’s my private Jet, Ahmed?”). Many people with this disorder react badly to criticism or events they dislike (“after all the hard work I put into repairing FIFA, is this what I get? Seriously?”).‌

People who suffer from NPD, are more likely to try to take advantage of people by manipulating them (Mother Afrikah, I hear you). They may have an overly emotional response if they don’t receive the attention they feel they deserve (“no, I don’t fly commercial! Don’t you know why I am?!). They may also overreact to situations to keep people focused on themselves.

Now, you may feel that I don’t know what I am talking about, in which case your last name is either Trump, Johnson or Infantino. If it isn’t, you might feel that all of the above has at least one common denominator: an immigrant (as he said himself), who came from nothing (well, ok.. Italy to me is something) and who is convinced that he alone can fix the problems of Africa, Europe, South America and Asia. So now, this sad immigrant set out to lecture the scarcely assembled Members of the European Council (who – in light of the brewing US crisis that threatens to thrust Europe into a senseless war with Russia – have apparently nothing better to do than listen to the partly insane burps of a man who is at war with anybody who disagrees with him, and apparently also with himself), Gianni Infantino – a man who sees windmills in every corner and one who is quixotical enough to believe that he is the man who can fix it all. This modern day Don Quixote delivered a memorable speech that is far too atrocious and mildly insane to repeat here. But what he said is that he can fix everything (see NPD above) through football.

I don’t think he omitted a single platitude. Maybe one: world peace. Other than that, it was all there: hope, solidarity, dignity, inclusivity, support, brotherly love. Literally everything that means absolutely nothing without implementation, and even less than that when it comes from the lips of a completely self-absorbed narcissist.

But this time, the picture-book Immigrant didn’t stop there. He went on and on and lost himself in self-adulation until that fateful moment when his mind tripped and he literally said:

“We need to find ways to include the whole world to give hope to Africans so that they don’t need to cross the Mediterranean in order to find maybe a better life but, more probably, death in the sea. We need to give opportunities, to give dignity. Not by charity but by allowing the rest of the world to participate. Maybe the World Cup every two years is not the answer. We discuss it.”

Besides the fact that there appears to be an emergency brewing what concerns his knowledge of English as a fifteenth language, “we” (whoever that may be) need to give hope to those poor Africans so that they stay put, don’t try to cross the Mediterranean Sea to “maybe find a better life” but who won’t because more probably, they’ll die at sea. This guy has lost the plot.

I have heard lots of uneducated, asinine, illiterate and deranged shit in my life while observing football from up close, but this utter insanity and racist ignorant fountain of crap tops it all.

I remember too well, when one Argentine football Grandee referred to Jews as ‘not good at football because they are not sporty by nature’. And I recall the mutterings of another cretin who referred to his main benefactor from the Middle East as ‘that sandn****r’. I met many an ExCo Member who seemed to have invented racism – and now, today, a decade or more later, I am astounded to observe that nothing, not a thing, has changed, were it not for the name plate of the guy on the presidential door. The mindset is the same, the arrogance is the same, the fantasies of power and success are the same, the false expectations and enraging beliefs of being entitled are the same, and the nastiness and condescension are worse than ever: see NPD above.

When Infantino decided to emasculate African football and take charge of CAF as only FIFA can, surrounded by the most despicable sycophants on God’s earth who have since done more to derail anything that could be a booming culture of football, when he appointed the operational leadership of CAF to maximise his chances or re-election, when he started to demand control by sheer manipulation and threats -in good old FIFA style – it became blatantly obvious that, while one set of crooks had left the scene, those who followed, tried their darndest to be worse. And they are succeeding just fine.

This is a man who – like his buddies in the US and London – is under criminal investigation by two Swiss Special Prosecutors, has ascertained that his competitor for the FIFA presidency was banned from football in the last minute: because he was under investigation.

But in the New FIFA, things changed. A guy who is under criminal probe has nothing to fear because those who are allegedly the independent Ethics Committee are about as independent as Infantino’s socks from his feet.

After this most recent despicable charade, disguised as speech at a session of the parliamentary assembly of the Council of Europe, a trans-national body dedicated to the support of human rights, and despite no sanctions having been spoken against the man until such time as the criminal investigation against him is concluded, after this horrendous faux pas, there is but one more thing to do for Infantino: resign. He is not competent, not intelligent enough, not qualified to run an organisation that needs help.

Infantino’s laughable attempt before the Council of Europe to discuss away what is nothing but a money-maximising scheme invented by his brethren in Riyadh and tabled before 200+ FIFA Members as a sound and solid concept, is a farce. And the likes of a Wenger are the daft accomplices in a dirty little scheme of misinformation and manipulation of those who will always say yes when they are promised more money and spoils.

If that is FIFA and its football, Infantino must go.

And if that is FIFA, the world needs a new system that governs football:

If that is FIFA, it needs to be abolished.

The six Confederations need to take charge and delegate 10 top quality managers each, create a central office and give it a single purpose: plan, organise and stage a football world cup. Every four years of course. That thing won’t need a president. Only a qualified CEO.

It is not brain surgery: after all, even Infantino can apparently do it – which is why he moved to Qatar, to make sure the folks down there don’t mess it all up – or some such. What does the Narcissistic Personality Disorder say among other things? No acknowledgment of others’ successes and Expectation for praise.

Infantino is but a money-grabbing obstacle to develop football.

Forget the talk of “hope” and focus on the game.