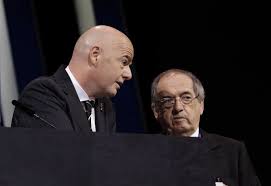 The Zurich boss attended the FFF’s executive committee meeting on Thursday to hand Le Graët, who is also a member of the FIFA Council, his new task.

Infantino lavished praise on the FFF and Le Graët (pictured right with Infantino). In a statement, he said: “The relation between the French Federation and FIFA is exceptional, like the relation between president Noël Le Graët and myself. We like to move forward on concrete projects for football, for its development. The results obtained by French football with young people, men and women in recent years are evident. The FFF is doing a remarkable job. I often talk with Noël Le Graët about what the example of French football can bring to world football development projects.”

Le Graët and Infantino have maintained close relationships and the Frenchman was one of few European FA’s bosses to publicly back the FIFA’s boss plans to stage the World Cup every two years. However, Infantino’s move comes at a delicate time and may raise more eyebrows.

Earlier this week, the embattled FIFA president suggested to European politicians that a biennial World Cup could solve the African migration crisis.

On Thursday, the New York Times reported that the head of the FIFA Legends program and a close confidant of the FIFA boss was found to have sexually harassed a subordinate in 2019. The same newspaper also detailed accusations of bullying, misbehaviour and sexism at the FFF last year.

In 2021, FIFA announced that it would open an office in the French capital to move a part of its operations out of Zurich. Under Gianni Infantino, the world governing body has decentralised and Paris was seen as more global than Zurich and politically closer to the African continent.

The choice for Hotel de Marine, near the Place De La Concorde, was no coincidence. The stately building has under gone a four-year, €132 million renovation and will be reopened on Saturday. The renovations were partly funded by Qatar.