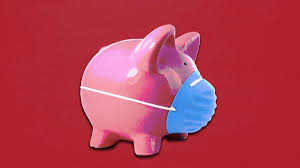 January 31 – The financial effects of the covid pandemic on Europe’s leading clubs is becoming more measurable with an analysis of 20 clubs showing an annual average decrease of €45 million.

The research, by the KPMG Football Benchmark team takes the accounts for 20 clubs for the 2018/19 financial year and compares them against the averaged financials for the following two covid-affected seasons.

“In the 2018/19 season, prior to the pandemic, the top 20 clubs combined for €7.586 million, of which FC Barcelona boasted the highest figures of €839 million. However, the aggregate average operating revenues of the following two seasons only totalled €6.692 million, a 12% decrease,” finds the report.

Real Madrid are highlighted as performing the best financially in terms of operating revenues. averaging €661 million over the two years.

“Worryingly, 18 out of 20 clubs achieved worse results on average in this two-year period, with the biggest decrease of 32% seen by Beşiktaş JK, whose figures are also depressed by the devaluation of the Turkish lira. On the flipside, Sevilla FC and LOSC Lille both managed to increase their revenues on average, by 15% and 40% respectively, due to improved sporting results – Sevilla won the UEFA Europa League in 2019/20 and participated in the UEFA Champions League a year later, while Lille pulled off the unthinkable and won Ligue 1 in 2020/21,” says the report.

While the revenues are still high, KPMG says the taxation shows “clearest the deterioration of the business of football in the past two years as aggregate net profits decreased from a € 227 million loss in 2018/19 to an average of €1,529 million loss in the following two seasons: a €65 million additional annual average loss per club.”

The biggest determinant of club profitability is generally how much players are paid. KPMG find that in the 20 clubs surveyed staff costs have remained relatively constant €4.613m on average over the two latest seasons, decreasing only 1% compared to 2018/19. 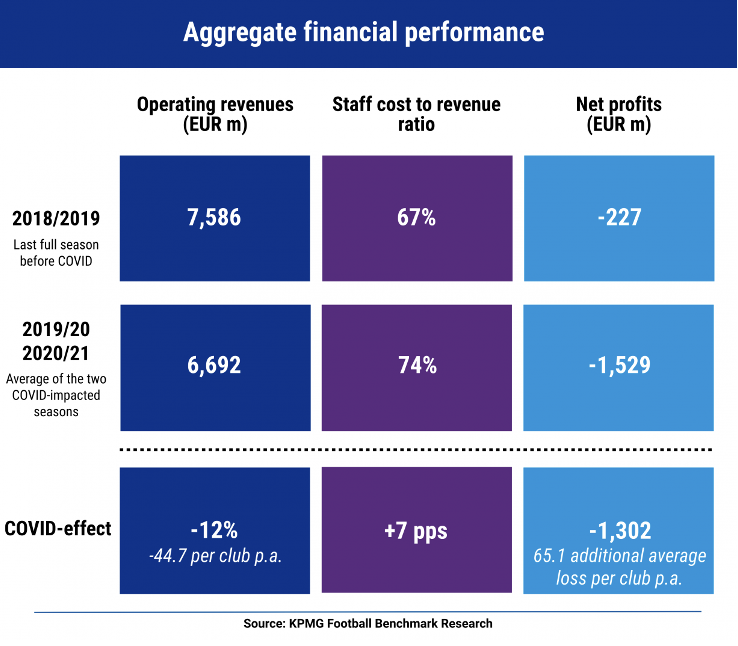 While players are insulated by their contracts, many players did take a pay cut in the 2019/20 season to help out their clubs. “However, costs did not decline at the same rates revenues did, resulting in the staff cost-to-revenue ratio rising by 7 percentage points on average, from 67% to 74%, in the COVID-impacted seasons,” says KPMG.

In conclusion the report says that clubs who have performed well on the pitch have fared better through prize money than clubs whose performance has faded. KPMG doesn’t see the financial picture for the 2021/22 season showing a big bounceback.

“The game is still being severely affected by the health crisis in the ongoing season, and it is almost certain that overall financial performance in the 2021/22 season will still be lower compared to pre-pandemic levels,” concludes the report authors.