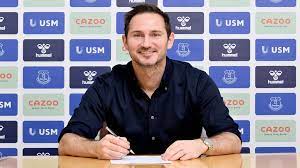 February 1 – Frank Lampard has become the new manager of Everton on a two-and-a-half-year contract, replacing Rafael Benitez who was dismissed after a disastrous spell at the Liverpool club.

Duncan Ferguson and Vitor Pereira were also interviewed during the final round of talks and Belgium coach Roberto Martinez, who coached at Goodison Park from 2013 to 2016, had also been among the hierarchy’s preferred candidates, but in the end, the club settled on Lampard, who coached Derby County and Chelsea previously in his young managerial career.

“I’m very hungry to get started,” said Lampard. “After speaking to the owner, chairman and the board, I very much felt their passion and ambition. I hope they felt my ambition and how hard I want to work to bring it together.”

“I think Everton is a unique club in that you can really understand what the fans want to see. The first thing they want is fight and desire and that must always be our baseline.”

“My first message to the players will be that we have to do this together. We’ll try to do our job and I know the fans will be there backing us.”

A discontent fanbase has been alienated by the club ownership.

Lampard, endured a tough end to his time at Chelsea in his first spell as a Premier League manager, and will need to get his act together quickly to turn around a club that has been mired in crisis for some time and is whose fan base is looking for an inspirational manager who can lead them into their new stadium once that is completed.

Key players and creative outlets like Richlarison have been sidelined with injuries. Others have been driven out of the club under the management of Benitez. However in the Winter transfer window Everton have signed Delle Ali, who had lost his way at Spurs, and Aston Villa winger Anwar El Ghazi on loan.

“He (Lampard) impressed us all greatly during the thorough interview process and we’re all ready to give him all of our support as he looks to give the team an immediate boost,” said Everton owner Farhad Moshiri.

“Frank (came) across as a modern, ambitious and exciting young manager. He expressed a clear vision on how he wants to take the club forward and, importantly, a tremendous passion and genuine enthusiasm to join us.”